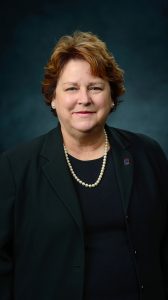 OXFORD, Miss. – Alice Clark, a renowned scientist, F.A.P. Barnard Distinguished Professor of Pharmacognosy and University of Mississippi administrative leader, has been named the 2017 recipient of the Distinguished Research and Creative Achievement Award.

The announcement of the prestigious honor, which includes $7,500 and a personal plaque, was made during the university’s 164th Commencement ceremonies in the Grove.

“Alice has had a tremendous impact on this institution – from a stellar student to a noted and accomplished researcher to director of a renowned national center and, for the last 17 years, as an outstanding member of our leadership team,” Chancellor Jeffrey Vitter said. “At every step, she has fostered innovative and energetic approaches, been a model of dedication and has played a key role in helping our university reach new heights of excellence.

“I am grateful to count her as my colleague, trusted adviser and friend. This award is a well-deserved recognition for Alice.”

The growth achieved during her tenure allowed the university to attain R1: Highest Research Activity designation by the Carnegie Classification of Institutions of Higher Education, the definitive honor for doctoral research institutions, representing only 2.5 percent of universities nationwide.

“I am exceedingly moved to receive this award,” Clark said. “My time as vice chancellor for research afforded me the honor of learning about the wonderful and highly impressive research, creativity and scholarly achievement that occurs every day on our campus. It is humbling to be selected among such an outstanding group of people.”

“I know I join many faculty members and administrators in being inspired by Alice’s career,” Gladden said. “As a scientist, she has made many groundbreaking discoveries, secured a great deal of competitive funding and won the admiration of her peers and several prestigious societies. As an administrator, she shaped the university and established a thriving research culture.”

Clark earned both her master’s and doctoral degrees in pharmacognosy at UM and joined the university as a research associate and faculty member in 1979.

During her time as vice chancellor for research, Clark found support for the creation and development of several research centers and institutes on campus. She oversaw and championed many university economic development efforts, including the creation of Insight Park, the university’s research park, and the Innovation Hub at Insight Park.

In her role as vice chancellor for university relations, she continues to oversee the university’s economic development efforts as well as communications, public events, federal relations and development.

Before becoming vice chancellor for research, Clark served as the director of the university’s National Center for Natural Products Research. Under her leadership and as a result of her strategic efforts, NCNPR grew from a small unit to an international leader in natural products drug discovery.

“Having known Alice for decades, I am extremely happy to see her receive this recognition,” said Larry Walker, director emeritus of NCNPR and professor of pharmacology. “Alice is a visionary leader with a sharp intellect and a knack for getting people to work together effectively to create progress.

“This was true at NCNPR, and it continues to be true in her role as vice chancellor for university relations.”

As a scientist, Clark has published extensively on the discovery of novel biologically active natural products and pharmaceuticals, authoring and co-authoring more than 100 original research articles, reviews and book chapters. She has presented more than 100 contributed papers at scientific meetings and given 19 invited symposia, seminars and workshop presentations in her field of expertise.

As principal investigator, she received continuous peer-reviewed NIH funding from 1984 to 2014 to conduct research related to the discovery and development of new drugs for opportunistic infections.

Clark has served in several leadership positions in national and international professional associations, including president of the American Society of Pharmacognosy and chair of the Pharmaceutical Sciences Section of the American Association for the Advancement of Science.

Her numerous honors and awards include the 2010 Marcy Speer Outstanding Reviewer Award, the preeminent honor for commitment to peer review given by the National Institute of Health’s Center for Scientific Review. She was the 1996 Rho Chi National Lecturer and is a fellow of the American Association for the Advancement of Science and the American Association of Pharmaceutical Scientists.

Clark shares much of her success with husband and longtime collaborator Charles D. Hufford.

In 1984, they received a half-million dollars from the National Institutes of Health’s National Institute of Allergy and Infectious Diseases to screen compounds for activity against opportunistic infections threatening the lives of AIDS patients. The grant allowed them to discover a class of potent antifungal drugs called sampangines.

Clark and Hufford continued to work together throughout their careers and shared many research successes, including a $1 million contract renewal in 1987 and a $372,000 grant from NIAID in 1989. That grant, which was renewed four times and became one of the longest continually funded antifungal research programs in NIH history, brought $7.4 million to UM and led to the identification of many new natural products.

“I’m grateful to have worked with Charlie and many other outstanding faculty members and researchers at the University of Mississippi,” Clark said. “Success is ultimately built on relationships and working with others.

“The University of Mississippi has many wonderful qualities, and perhaps chief among them is the quality of our people, who have a strong record of working together, working hard and achieving great heights through collaboration, resourcefulness and bold, innovative thinking.”

This year marks the 10th anniversary of the Distinguished Research and Creative Achievement Award, which is sponsored Syed Abidi, a UM alumnus and CEO of Pharmaceutics International Inc. It was initiated during Clark’s time as vice chancellor for research.