Work could improve reliability of connections with spacecraft, improve cellular service on Earth 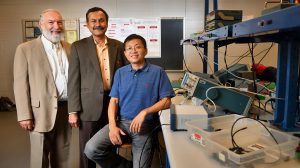 Lei Cao, Ramanarayanan Viswanathan and John Daigle, all professors of electrical engineering, are working with researchers at Jackson State University and the Jet Propulsion Laboratory on a project funded by NASA’s Experimental Program to Stimulate Competitive Research, or EPSCoR.

The project, “A New Paradigm for Efficient Space Communications: Rateless Coding with Unequal Error Control and Data Fusion,” has achieved good results in theory and simulations. The team has proposed a new protocol for deep-space communications that may both improve the reliability and increase the reception rate of images or data received from spacecraft.

The results may provide a basis for improving data transfer rates over wireless systems, such as cellular phones, on Earth. The project also may help enable the co-existence of different wireless communication systems for sharing the same frequency spectrum.

“Our simulation results demonstrated that the new protocol could improve the telemetry channel throughput by 46 percent over a fixed-rate communication method,” Cao said. “It could also achieve 92 percent of the theoretic upper-bound, while eliminating the need of retransmission.”

The primary challenge in deep-space communications is that as spacecraft travel farther from Earth, the vast distances cause substantial round-trip delays in the signal and high bit error rates in wireless communications.

“For instance, the round-trip time for (a) radio signal is from 8 to 40 minutes between the Earth and Mars,” Cao said. “This feature makes the protocols based on the receiver acknowledgment and transmitter retransmission of lost data packets that are currently deployed in our daily-used, land-based wireless communications networks no longer appropriate for deep-space communications.”

Also, the long distances cause large attenuation (loss in the signal’s strength along the path), various noise and distortion due to the Earth’s atmosphere and the sun’s corona.

“The water vapor, in particular, affects higher-frequency microwave signals, such as 32 gigahertz Ka-band,” said Kenneth Andrews, of the JPL. “If a spacecraft is on the far side of the sun, and the sun-Earth-probe angle is less than about 3 degrees, then the received signal that passes close enough to the sun will also be distorted by the tenuous plasma of the sun’s corona.”

“Therefore, the signal-to-noise power ratio at a receiver is often extremely low, which easily raises the bit error rate to higher than 1 percent in many deep-space communication scenarios.”

Solving these difficult problems is critical because the need for higher data-rate communications for various exploration missions continues to grow, said Viswanathan, who also is chair of the UM Department of Electrical Engineering.

“Through this cooperative agreement, the research team at UM has made significant contributions to improve both the quantity and quality of information obtained through deep-space exploration,” he said.

Data in communications are in the form of binary bit sequences. One bit sequence is often segmented into a number of packets, or basic data units. For example, a few thousand bits could be grouped into one packet. Bits in the packet can be coded together to increase their resilience to signal distortion. 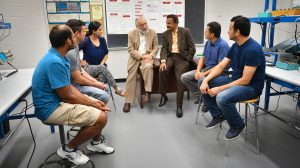 “The success of recovery will not depend on which new packets are received but on the number of packets received, which is slightly more than the number of original packets,” Daigle said. “As a result, the new protocol eliminates the need of requesting the transmitter to resend any unsuccessfully delivered packets.”

Together with this new protocol, a number of advancements, including effective coding and decoding algorithms, dynamic selection of the code rate of error control codes and channel prediction algorithms, have been made so that substantial improvements in data transmission over space-to-earth channels can be achieved.

In addition, efficient methods of fusing data to improve the quality of information derived from the collected data have also been developed. New strategies have been proposed to determine what kind of information should be sent to the fusion center from different observers and what optimal fusion rule should be used to maximize the detection probability while minimizing the false-alarm probability.

“The theoretic advancements and practical implementation methods made through this project have been documented in more than 20 peer-referred publications and invited talks and conference presentations,” Viswanathan said.

Besides the technical achievement, a research team, which includes three professors and several graduate students in the Department of Electrical Engineering, has been formed to focus on areas of fountain codes, signal detection and wireless communications. This team, working with other faculty within School of Engineering, has been pursuing collaboration and research opportunities with other agencies and companies.

One prominent success is the establishment of the UM site of the Broadband Wireless Access and Applications Center in 2016. BWAC is a multi-university National Science Foundation Industry/University Cooperative Research Center, led by the University of Arizona in partnership with UM, Virginia Tech, University of Notre Dame and Catholic University of America.

“The mission of BWAC is to collaborate with industry research partners to create flexible, efficient and secure wireless networks that satisfy broadband communication needs in businesses, in the home and in the lives of individuals,” Daigle said.

“Through this UM site, the research team has been collaborating with companies including Intel, Qualcomm, Raytheon and C Spire in various projects in wireless communications, particularly in antenna design, 3-D printing and cognitive radio in 5G wireless systems.”

Some of the work directly links to the technologies and expertise developed through this NASA project.

“To contribute to the higher education in the state of Mississippi, the research team has also actively involved undergraduate U.S. citizen students into the project to gain them hands-on research experience,” Cao said. “Using Universal Software Radio Peripheral and GNU radio, the undergraduate students at UM have built up some interesting projects in wireless communications.”

For example, they have built a small network that can perform the same basic functions as a commercial Global System for Mobile network, including voice, Short Message Service, Multimedia Messaging Service and General Packet Radio Service.

“The advantage of this implementation is that a self-contained cellular network can be created with a single computer,” Viswanathan said. “This simple network can be extended with multiple nodes to ideally use for situations where mobile communications infrastructure is absent or compromised, such as in disaster-struck areas.”

This project is funded by NASA cooperative agreement No. NNX14AN38A. Any opinions, findings and conclusions or recommendations expressed in this material are those of the researchers and do not necessarily reflect the views of the National Aeronautics and Space Administration.”