Capt. Barrington Irving, a pilot for National Geographic and Guinness World Record setter, explains to JPS students how he “hustled” the parts to make a $650,000 airplane that he flew around the world. (Photo by Aron Smith/JSU)

Audible gasps of disbelief fill the auditorium of the Jackson State University College of Science Engineering and Technology. Capt. Barrington Irving, 34, has just told a group of all-male students, from Jackson Public Schools, that he declined a football scholarship to the University of Florida.

Capt. Barrington Irving shared with students participating in the JSU/Verizon program that he had one pair of dress shoes with three holes in the soles. Irving emerged from poverty and became a successful pilot who uses his aviation skills to give back. (Photo by Aron Smith/JSU)

“It was actually the best decision I ever made,” he says with a smile, adding that only two of his fellow high school athletes made it to the NFL, but their careers ended after only 2 ½ years.

By choosing a different path, Irving says he has been able to see the world and do a variety of things he had not foreseen.

At the age of 23, he set the Guinness World Record for being the first and youngest African-American pilot to fly around the world in 97 days, logging 147 flight hours and making 27 stops in 13 countries.

On Friday, he spoke with over 100 campers in the HBCU’s grant-funded Verizon Innovative Learning Minority Male Program, which instructs male students of color in STEM disciplines five days per week, eight hours per day throughout the summer.

“I think it is critically important for our black boys to see African-American men excelling in STEM specifically to help them realize they have the potential to do the same,” says Dr. Tameika Bradley, interim associate dean of the College of Education.

She shares that the event is a result of collaboration between the Verizon Foundation and Irving’s Experience Aviation – a nonprofit organization dedicated to bridging the gap between students and STEM awareness by using aeronautics.

“Jackson State is one of 16 Verizon learning innovate sites for minority males. We are one of the first four schools awarded,” said Bradley, who is also the principal investigator of the grant.

The kids are intensely engaged as Irving, born in Jamaica, talks about growing up poor in the neighborhoods of Liberty City and Opa-Locka – arguably two of the most violent and crime-ridden areas in Miami, Florida.

Upon meeting Capt. Gary Robinson, a “swagged out” United Airlines pilot, life changed for the high school fullback. Robinson asked the youth, who could not stop staring at his flight attire if he were interested in becoming a pilot.

“The first words out of my mouth were: ‘Sir, I’m not smart enough to fly an airplane,’” he tells the group. But when Irving learned that airplane pilots could make $117 an hour, he was intrigued.

Robinson then volunteered to mentor Irving once a month during 30-minute phone conversations. It is a relationship that remains today. 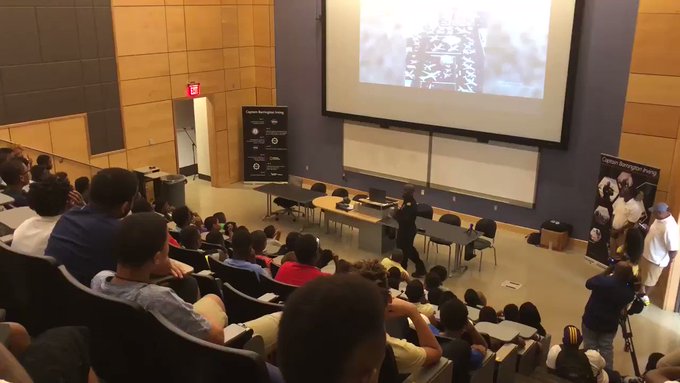 Although Robinson sparked his interest in aviation, it was Irving’s social studies teacher, “Mrs. Batiste,” who pushed him to turn down his scholarship and attend community college instead.

“I couldn’t stand Mrs. Batiste because she was just difficult due to her expectations of me,” says Irving, who appears to echo the sentiments of many youths that do not quite understand why an educator may take an interest in them.

However, he continues, “What I didn’t realize, is that she saw more potential in me than I saw in myself. She’s also still one of my mentors.”

“While I’m earning my bachelor’s degree, I was also attending flight school. So I was taking 18-21 credits a semester. Very grueling, but it was well worth it,” he says.

After graduation, Robinson challenged him to give back to the community. Confused, Irving expressed that he was “broke.” His mentor replied: “give your time, experiences and knowledge.”

It was in this moment that Irving decided he would fly around the world. “I simply wanted to inspire a bunch of kids in one swoop… not realizing the mission would become much greater than me,” he says.In 2005, he founded his Miami-based Experience Aviation organization. A year later, he opened the EA Learning Center to provide middle and high school students with STEM programs and career guidance. In September 2014, he launched the world’s first interactive STEM experience learning adventure aptly titled “The Flying Classroom.”

As pictures of teens partaking in his aviation program flash across the projection screen, the pilot asks attendees if they recognize anyone. Someone yells out the name Trayvon Martin, the 17-year-old black unarmed high school student fatally shot and killed by George Zimmerman, a neighborhood watch volunteer.

“Trayvon didn’t make it. That’s why it’s so important to take advantage of the opportunities you have in life. You never know when your number will be called,” says Irving, whose team consists of young adults who have all been through his program.

The room momentarily grows quiet in what appears to be a somber moment of reflection.

Today, Irving and his crew have flown to every continent except Antarctica and executed 16 ground, air and sea expeditions where he explores real-life STEM applications including history, geography, social studies and language arts.

“We transformed our airplanes into a real life magic school bus and literally travel around the world practically exploring some of the things you have to learn,” he tells the students.

Educators can access the “Flying Classroom” online and use his videos to instruct their classes in a range of academics.

As he speaks, Irving shares videos and photos of his expeditions. The children ‘ah and ooh’ as they watch him halo jump from a plane at 30,000 feet, stand next to a 13-foot crocodile or hover 10 feet above 2400-degree lava. He admits that some of his more fearful missions involved handling reptiles like the venomous sea snake with the closest hospital an eight-hour plane ride away.

Sounds of disgust ring out when the pilot reveals that he ate a fruit bat then shows a picture of the mammal on a plate with creamed potatoes. “The hardest part was getting the hair off,” he says, with a smirk.

Later that morning, the adventurer reveals that one of the more difficult portions of his journey to fly the friendly skies was realizing his potential.

“I think that’s something that a lot of people struggle with especially young black males.” He explains, “Because sometimes you don’t feel you belong or you’re viewed a certain way. That was a big-time struggle for me.”

The aviation enthusiast says he overcame obstacles by engaging in unfamiliar activities and mastering the art of rejection.

“Every project I wanted to do, people were telling me there is no way it could be done. I’ve learned to try and understand why they say something is impossible and then I figure out how to do it,” says Irving, whose team spent the day helping JSU campers learn about drone technology, 3D printing, autonomous engineering, and coding.

Eighth-grader Justin Beacham was encouraged by the story of pilot Capt. Barrington Irving. Beacham says as an aspiring patent attorney he recognizes the importance of learning a STEM discipline. (Photo by Aron Smith/JSU)

“Most of us kids from the inner city don’t get to see things like this. We don’t know any of these things are possible.” He says, “Personally, I think it helped me out a lot. It gave me motivation and encouragement that I can be successful.”

The middle schooler, who plans to be a patent and constitution attorney, adds that he was moved by Irving relinquishing his football scholarship to pursue his aviation dreams. Beacham says that the decision only confirms that there are opportunities for minorities outside of the sports and entertainment industry.

Severe McNeary, a student at Hardy Middle School, says he now wants to travel around the world and visit Antarctica with the hopes of setting a Guinness record. But the importance of the JSU and Verizon collaboration is not lost on the seventh-grader.

“The program is awesome. I really looking forward to coming each day. I think everyone should be able to experience this.”