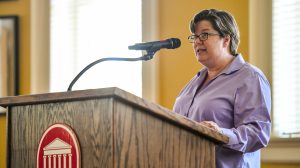 This year’s winners are some of the university’s strongest scholars, said Charles L. Hussey, professor of chemistry and associate dean for research and graduate education.

“This is the first instance that the College of Liberal Arts has given such awards to established faculty members,” Hussey said. “The three individuals who were chosen for these awards represent the very best scholars that the college, if not the university, has to offer.

“They have enjoyed distinguished careers at UM and selecting them for this recognition was a simple matter.” 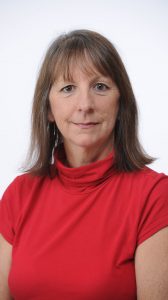 Chosen from among all categories of liberal arts disciplines, the recipients have achieved scholarly recognition and influence well beyond the Ole Miss campus. Each receives a $2,000 cash prize and a medal presented at the College of Liberal Arts graduation ceremony in May.

Harker, who also serves as director of the Sarah Isom Center for Women and Gender Studies, said she feels honored to be among the first awardees.

“I am delighted to be one of the inaugural recipients of the 2017 Research, Scholarship and Creative Achievement Award,” Harker said. “Valuing humanities research is important, and so is recognition of interdisciplinary scholarship like gender studies.

“The College of Liberal Arts is filled with brilliant scholars, and I look forward to their achievements in the future.”

The creation of the award reflects the university’s renewed emphasis on science, technology, engineering and math education, Berti said. 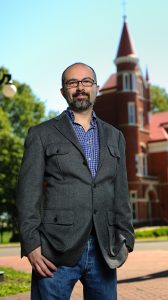 “I am happy and grateful for this award,” Berti said. “For me, it is particularly meaningful because it recognizes the growth of the gravity group, of the physics department and of the university as a whole as one of the leading research institutions at the national and international level.

“The creation of this award and other institutional initiatives, like the Flagship Constellation program and the construction of the STEM building, are promising signs that this growth will continue in the future.”

Ethridge said she is honored to be included among this group of esteemed scholars.

“I’m honored to have won this award, and I am especially humbled to be in the company of Jaime and Emanuele, both of whom have made impressive contributions to knowledge,” Ethridge said. “Such recognition is relatively rare in this game and I much appreciate the university’s efforts to highlight research, scholarship and creative achievement among its faculty. It is indeed very special.”

Department chairs and tenured faculty members with the rank of professor are invited to submit nominations. Each nominee’s unique contributions to research, scholarship and/or creative achievement, as well as the candidate’s CV, are evaluated by a select committee.

The dean’s office will solicit nominations from all college departments by March 1 of each year. More information on the nomination process can be found here.