Two JSU seniors in the College of Science, Engineering and Technology (CSET) captured first place and lucrative six-figure job offers from IBM recently during Blue Hack – an Atlanta hackathon that encourages participants to develop within 30 hours ideas that could potentially solve some of the world’s most pressing issues.The competition encourages innovations such as curing diseases or building an app for global peace.

The presentation was tremendously successful for computer engineering major Edgar Johnson, a Chicago native, and computer science major Yosef Getachew, an Ethiopian native. The duo, both 21, developed a web application called HyperT. They received accolades from peers and professional tech experts and a promise of future employment.

Johnson and Getachew say their client-server computer program HyperT helps subcontractors and internal HR decision-makers “construct the most efficient software team based on a personality and technical assessment.”

In other words, the program selects individuals who are an ideal fit to work together on projects that will yield optimum results. 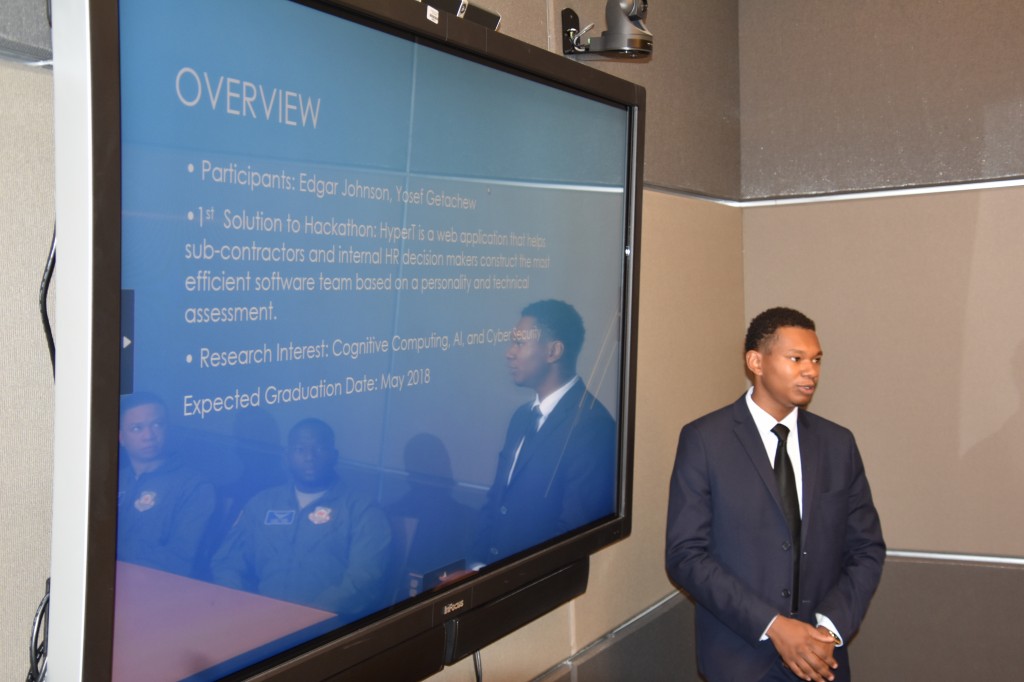 With the clock ticking down to complete the assignment in just 30 hours, their idea finally emerged after brainstorming for nearly seven hours and interviewing IBM mentors. Johnson and Getachew learned that many of the IBM employees have experienced being on teams in which they felt they were unequally yoked.

“Sadly, this is a recurring problems. People are put on software development teams that are not a good fit for them,” Johnson said.

Johnson said the software is not only useful to businesses but can benefit schools and universities. The program’s algorithm helps identify members for group projects by “making sure everyone is on an equal team based on their personality and technical skills,” Johnson said.

Furthermore, he said, “A lot of software development teams fail because they’re too busy focusing on a person’s singular amazing skill set but overlook whether he’s a good fit for the team. If that person doesn’t fit well, then he’s not going to be successful.”

So, building the best team requires answers to assessment questions such as what programming language a person is most familiar with and comfortable with.

The process involved asking individuals to submit an essay for generating personality insights. The algorithm uses data from IBM personality traits API (application programming interface) and a technical survey to generate a total individual score and put people on a software development team that best suits them.

Results that reveal a person’s strengths and other characteristics are calculated after analyzing the following “Big 5” personality traits identified by the “123test” from an independent European company:

Johnson said a person’s diction is another important aspect of this personality study. “The words a person use can determine the type of person he or she is,” Johnson said.  Furthermore, he said it’s possible to determine people’s propensity to engage in violence or crime by analyzing their social media accounts.

Once he graduates in the spring, Johnson will begin working for IBM in Cambridge, Mass. He’s already received his award letter detailing a $103,000 annual salary. He’ll be working for IBM on its Watson Health project with Harvard University and the Massachusetts Institute of Technology.  The Watson project builds on a partnership between humanity and technology.

Johnson said IBM told him that the company “wants the most innovative minds on this project.”

Johnson is among the highest-paid engineering graduates from JSU. His HyperT partner, Getachew, also received an offer from IBM with similar details.