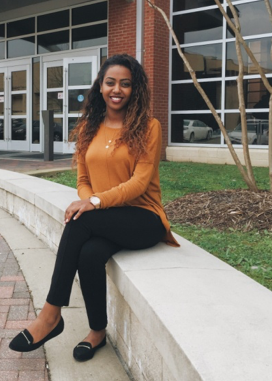 “During my experience in college, one of the important things I learned is to use every small or great opportunity,” she said.

It appears Esatu has been doing just that. She was involved in the research of “An electronic system for detecting lives in disasters” under the supervision of Dr. Ashraf Khan and funded by the Center for Undergraduate Research at JSU, now the Institute of Undergraduate Research. She was also a summer undergraduate researcher in 2016 for the UCB-HBCU program. Esatu is now considered a UCB-HBCU fellow.

Additionally, she received the Berkeley Electrical Engineering Computer Science Excellence (EECS) Award for her outstanding academic record at JSU. Regarding her achievements, she said, “I would like to express my deepest gratitude to my family, my college advisor, Dr. Khan, and most importantly the Electrical and Computer Engineering department of Jackson State University for the support and encouragement throughout my undergraduate years.”

The Electrical Engineering program at Jackson State University was established in Fall 2012 through funding received by the Entergy Corporation.