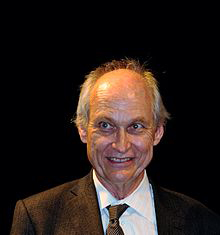 OXFORD, Miss. – The origins of the universe is the topic for a monthly public science forum organized by the University of Mississippi Department of Physics and Astronomy.

Michael Turner, the Bruce V. and Diana M. Rauner Distinguished Service Professor of Physical Cosmology and director of the Kavli Institute for Cosmological Physics at the University of Chicago, will discuss “Einstein’s Outrageous Universe: Gravitational Waves, Black Holes and the Big Bang” at the fall semester’s first meeting of the Oxford Science Cafe.

“Einstein changed the way we think about the universe,” Turner said. “In this presentation, I will discuss three of the most timely and interesting things in our universe: gravitational waves, the big discovery of this year; black holes, they are everywhere; and the beginning of the universe, the big bang.”

“They came from two massive black holes that merged a billion years ago and spectacularly verified a major prediction of Einstein’s theory,” he said. “The detection involved measuring the distance between two mirrors to a precision of one-thousandth the size of the proton!” Turner’s appearance is part of the Harlow Shapley Visiting Lectureship Program of the American Astronomical Society, a program of two-day visits by professional astronomers who bring the excitement of modern astronomy and astrophysics to colleges of all types. Besides his Science Cafe presentation, he is scheduled to give a talk on “Cosmology” in the colloquium series of the Ole Miss physics department at 4 p.m. Sept. 13 in Lewis Hall, Room 101.

Turner’s appearance should provide a fascinating look at cutting-edge research, said Luca Bombelli, chair and professor of physics and astronomy.

“Dr. Turner is one of the most prominent theoretical astrophysicists and cosmologists in the U.S.,” Bombelli said. “Among his many honors, he has served as chair of the Physics Section of the National Academy of Sciences, led the Directorate for Mathematical and Physical Sciences at the National Science Foundation and is a past president of the American Physical Society.”

A theoretical cosmologist who coined the term “dark energy” in 1998, Turner was formerly the assistant director for mathematical and physical sciences for the U.S. National Science Foundation from 2003 to 2006. His book, “The Early Universe,” co-written with fellow Chicago cosmologist Edward “Rocky” Kolb and published in 1990, is a standard text on the subject. Turner’s 20-plus former doctoral students hold faculty positions at leading universities around the country, at national laboratories and on Wall Street. He has served as chief scientist at Argonne National Laboratory, chair and president of the Department of Astronomy and Astrophysics and president and chairman of the board of the Aspen Center for Physics.

Turner’s national service includes membership on the NRC’s Committee on Science, Engineering and Public Policy and on the senior editorial board of Science Magazine, chairmanship of the OECD Global Science Forum’s Astroparticle Physics International Forum, membership on the board of directors of the Fermi Research Alliance, and serving as secretary of Class I of the National Academy of Sciences and founding chair of ScienceCounts, a new 501(c)3 organization that promotes awareness and support of science.

Turner received a bachelor’s degree in physics from the California Institute of Technology in 1971 and earned his doctorate in physics from Stanford University in 1978. He holds an honorary Doctor of Science degree from Michigan State University and was awarded a Distinguished Alumnus Award from Caltech in 2006.

He helped establish the interdisciplinary field that combines cosmology and elementary particle physics to understand the origin and evolution of the universe. His research focuses on the earliest moments of creation, and he has made contributions to inflationary cosmology, particle dark matter and structure formation, the theory of big bang nucleosynthesis and the nature of dark energy.