Jackson State University will unveil Mississippi’s only School of Public Health (SPH) during an official ribbon-cutting ceremony at 5 p.m. Monday, April 3, which will usher in a global push for disease prevention that aims to curb soaring medical costs associated with treating worsening health conditions. 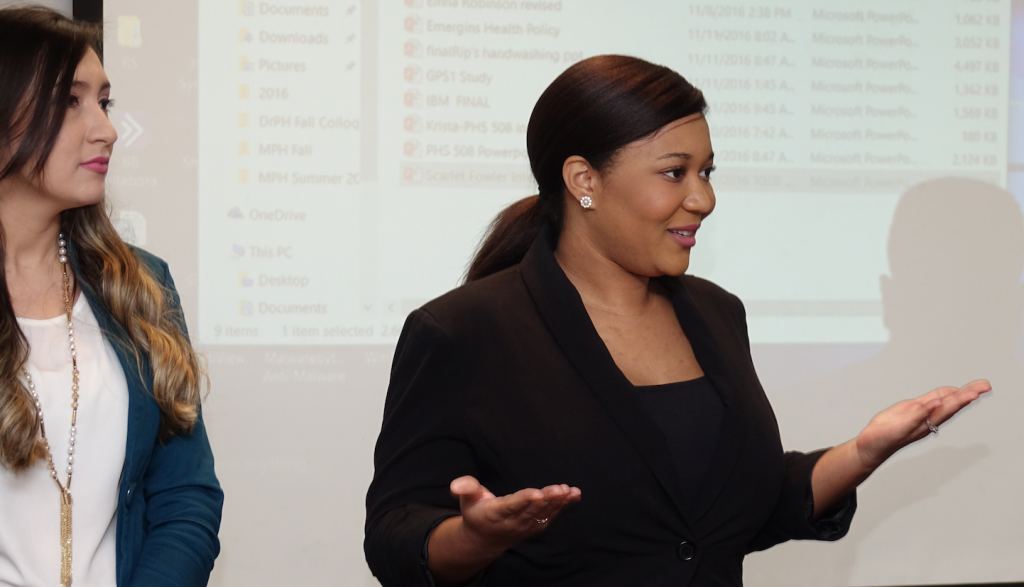 Tierra McMillan, foreground, presented research during the School of Public Health Initiative 2016 fall colloquium for the master’s program. Her topic was “Exploring the Association Between Sexual Behaviors and Spatial Mobility of African American MSM (men who have sex with men) in Jackson, MS.”

The upcoming event at the Jackson Medical Mall will coincide with National Public Health Week and include the signing of a proclamation and an appearance from Gov. Phil Bryant. Guests will consist of other statewide lawmakers, who, with Bryant, have provided financial and logistical support.

Research possibilities are expected to be enormous as the new school examines, for example, why life expectancy for African-American men and women in Mississippi is less than that of Caucasians.

IN February, the Council on Education for Public Health (CEPH) approved JSU’s application to begin the two-year accreditation process for the School of Public Health after declaring it had successfully met the following requirements: at least 21 faculty members; multiple departments, at least two doctoral degrees; and five degree concentrations.

At JSU, the five concentrations are Communicative Disorders; Behavioral and Environmental Health; Epidemiology and Biostatistics; Health Policy and Management; and Healthcare Administration.

Dr. Mohammad Shahbazi, interim dean of SPH who will preside over the ceremony, described the occasion as “greater than Jackson State.” He bemoaned, however, that when it comes to issues of health in Mississippi, the state is generally always at the bottom. Yet, he envisions JSU’s School of Public Health to have a global impact.

Meanwhile, Shahbazi said he is concerned about the financial strain on the U.S. economy because the nation spends 17 percent of its gross domestic product on healthcare for diagnoses and treatments. “Since the School of Public Health focuses on prevention, I would like our school to work somewhere in the middle to bring these extremes together.”

He noted that 80 percent of people’s health outcomes have nothing to do with their genes. “Instead, it has to do with social determinants of health such as education, income and access to insurance. With public health you can inform people about their behavior and alter their health outcome. Therefore, with the School of Public Health, we can focus on disease prevention and health promotion.” 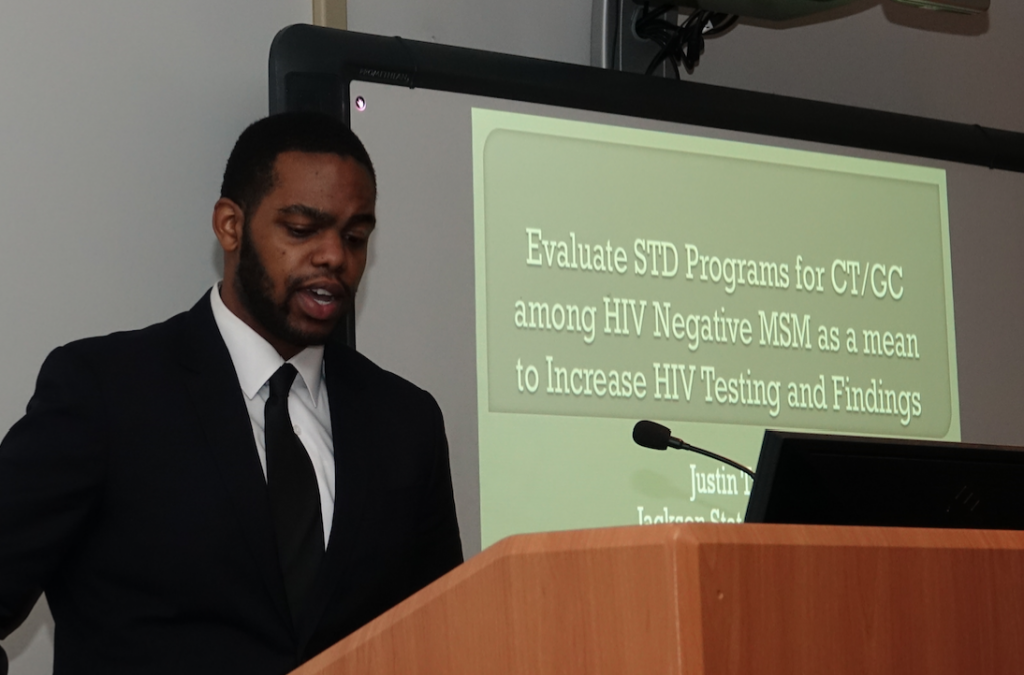 During the colloquium, Justin Taylor delivered his study: “Evaluate STD Programs for CT/GC among HIV negative MSM as a means to increase HIV Testing and Findings.”

Futhermore, Shahbazi said, “We want to collaborate with medical institutions to train physicians to think like public health experts, with emphasis on population rather than just individuals. Typically, schools of public health are part of medical schools. However, we are among a few that are not.”

DR. Marinelle Payton, chair and professor in the Department of Epidemiology and Bistatistics, sees the future of JSU’s public health as transformative because of the lives it will impact along with an expanded workforce of practitioners.

“We will be able to reach far in the corners of the world, attracting many faculty and administrators,” she said. “And public health will provide a lot of opportunities to address health disparities in Mississippi,” said Payton, who describes her area of epidemiology as the foundation for public health because of its focus on research and biostatistics for its applications for interpreting data related to biology.”

She noted that Mississippi is rated high in all clinical ailments such as heart, lung and kidney diseases but is encouraged that JSU will become a leader by researching and studying methods of health outcomes. 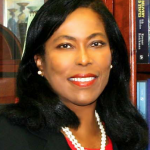 Shahbazi emphasized that just because a mother, for example, may have a breast cancer gene her daughter’s predisposition to it may not result in contracting the disease because of exercise, better foods and a change from other unhealthy cultural practices. “You can alter behaviors so that genes don’t play a role in your health outcomes,” he said.

The Jackson Heart Study, which started more than 20 years ago, is considered one the pillars of the School of Public Health. It has more than 5,000 African-Americans involved in a study funded by the National Institutes of Health on the prevalence of cardiovascular disease among blacks. The Jackson Heart Study and the Center for Minority Health and Health Disparities – which itself has existed about six decades – will support the goals of the new school.

Meanwhile, other department leaders see the School of Public Health as a platform for promoting awareness and education: 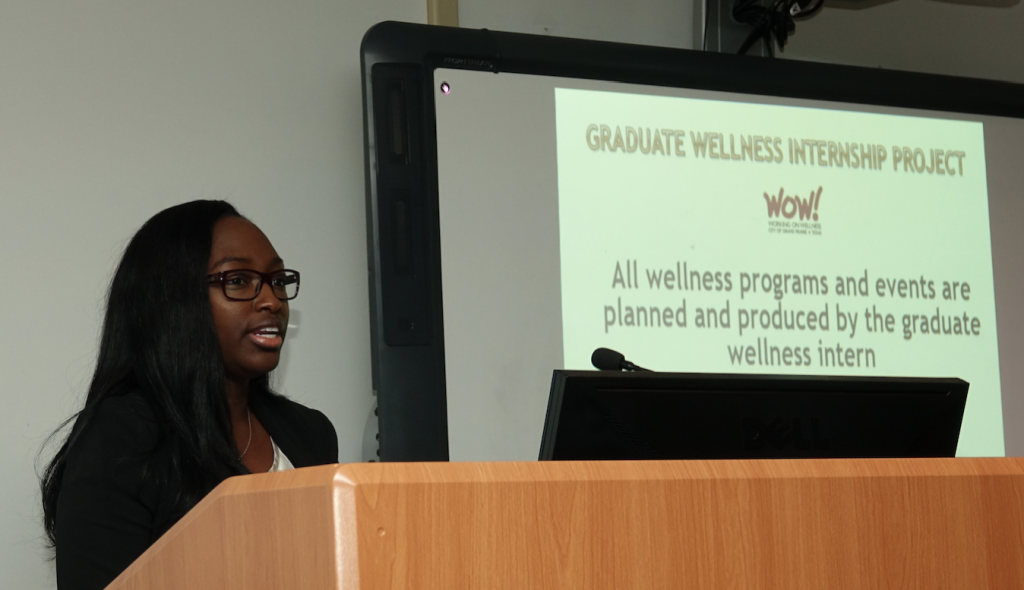 Scarlett Howell shared her message during the fall presentation: “Evaluation of a Wellness Project.”

TO further improve health outcomes, Shahbazi is pushing another initiative with grant assistance from the Centers for Medicare and Medicaid Service. As he explained in a New York Times Magazine article in 2012, the effort would support a pilot program called “health houses.”

It’s a concept that involves training community health workers who are certified to perform basic care, make house calls and provide low-cost preventive services to their patients/neighbors in some rural, desolate areas such as in the Delta, where there may not be any doctors.

Today, Shahbazi is taking advantage of annual grants that began in 2014 through incentives outlined in the Affordable Care Act. It allows Medicare and Medicaid to offer funding to organizations that propose new ways to prevent illnesses and save money. Because of the grant, there is absolutely no cost to patients.

So, the idea to start health houses in rural areas came from Shahbazi’s native Iran, where trained workers assess a patient’s life and learn how their diseases are being self-managed. Another benefit in Iran, like in Mississippi, is that patients are more likely to trust those from their own villages or communities. In Iran, for example, trained workers advise on nutrition, family planning, monitor blood pressure, assess prenatal care, provide immunizations and monitor environmental conditions such as water quality.

In Jackson, Shahbazi, with local health care advocates and experts, partnered with national insurer United Healthcare. Fortunately, for Mississippi, the provider realized the potential for cutting costs, and “we have documented that we saved $8,500 per person annually just by using community health workers,” he said. “They will check blood pressure, sugar level and be culturally competent, among other things. … In addition, community health workers check on people’s houses to see if there is mold in their kitchens, for example, and whether they’re following up with their appointments.”