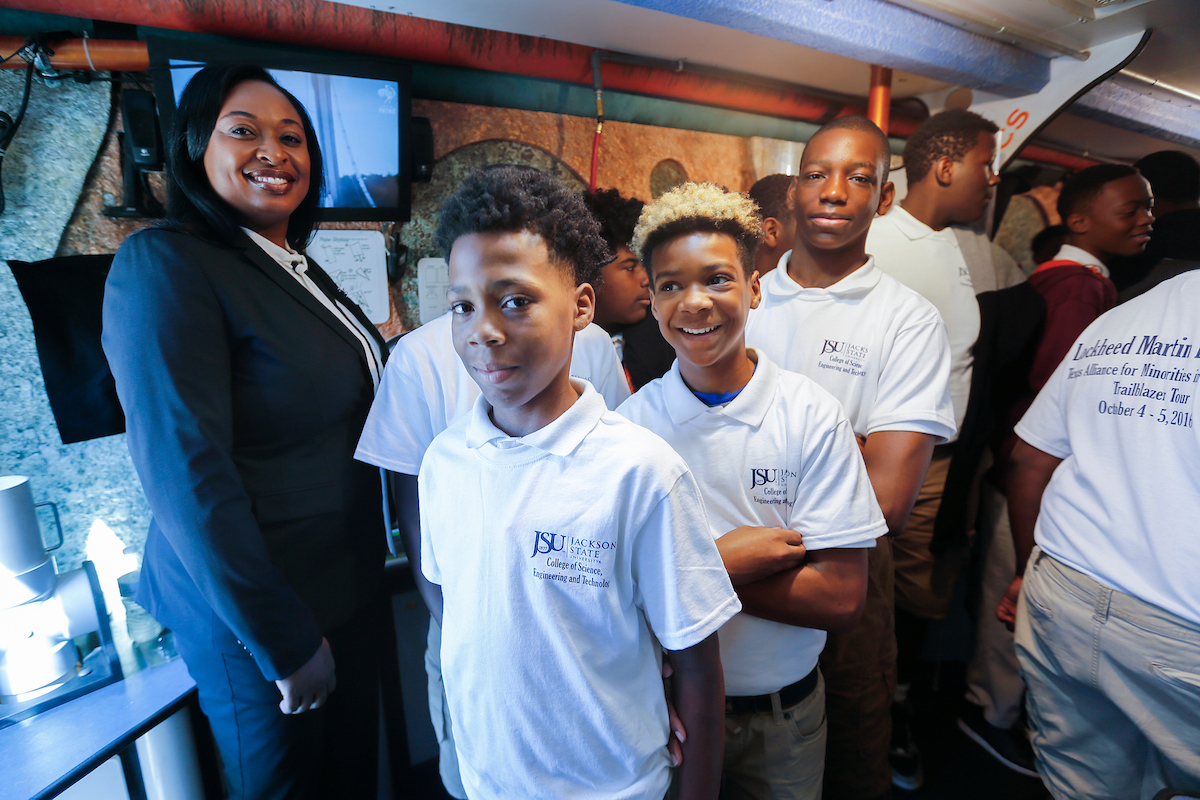 He said despite 500,000 African-Americans who graduate annually from high schools that only 35,000 have math and science backgrounds to enter STEM. Even more disturbing, he said, is that only 5,000 of those graduate every four to five years with such degrees. “That’s a 1 percent yield on a 16-year investment on your education. So, the moment in time is now,” said McGowan, urging middle school students to begin considering STEM as a career path.

CSET dean Dr. Richard A. Aló delivered a similar message. He said national studies show that African-Americans, Latinos and Native Americans are “less than 15 percent of the school-age population who are ready to go to college when they graduate from high school.” 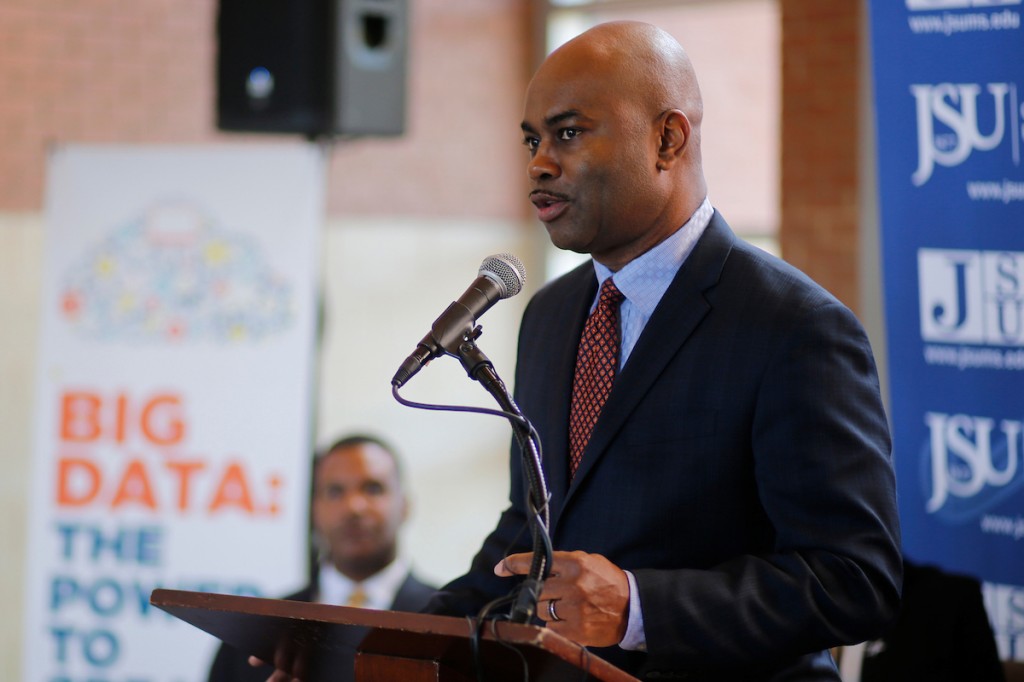 Derek McGowan, diversity outreach program manager for Lockheed Martin, said only 5,000 African Americans graduate every four to five years with degrees in STEM. “That’s a 1 percent yield on a 16-year investment on your education.” (Photo by Charles A. Smith/JSU)

Aló said, “Getting young people interested in technology is about motivation and inspiration. I hope we can improve that dismal figure. We’re pleased that Lockheed Martin has been able to do this. JSU named a summer program the Lockheed Martin STEM Academy, which is making a difference because it’s appealing to students in seventh-, eighth- and ninth-grades. It’s academically intensive with English, computer science, science, physics and math. When students are done with the program 75 percent of them will graduate from college in STEM,” he said.

In conjunction with Lockheed’s visit, students toured a science museum on wheels called Trailblazers that provides hands-on exhibits. The mobile classroom teaches young students about energy, space, weather, biotechnology and aerodynamics. It also introduces them to educational and career opportunities in STEM.

Scott Trapp, diversity outreach director at Lockheed, described his company as a trailblazer.

“We recently were named the No. 1 HBCU supporter three years in a row by CCG (Career Communications Group),” said Trapp, describing the minority-owned services company as a business with a mission to promote career and educational opportunities for minority professionals and students in engineering, technology and science. “We got there through engagement and faculty development. … We also invested in student curriculum.”

Chinelo Bosh Evans said, “Any of us can look in society and identify a challenge, but what Jackson State and this College of Science, Engineering and Technology have done is to create a catalyst for change and solutions by introducing our scholars to STEM opportunities and STEM-career exploration.” She said the partnership allows young people to see others who look like them and discover how they defied the odds.

Norwood, also vice president for Lockheed’s AMMM (Air Mobility and Maritime Missions) Line of Business Integration, said, “It’s important for middle school students to be introduced to science, technology, engineering, mathematics so they will have an idea of the possibilities of what they can become as they matriculate through their education.” 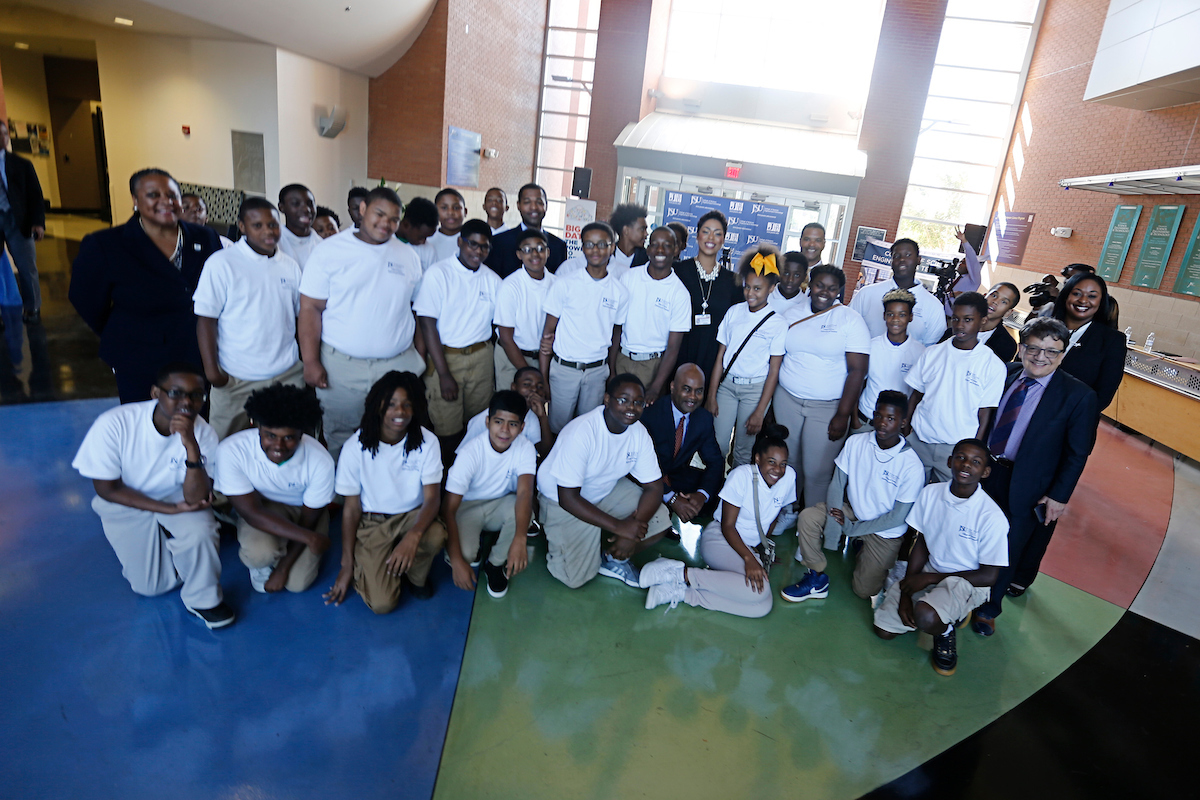