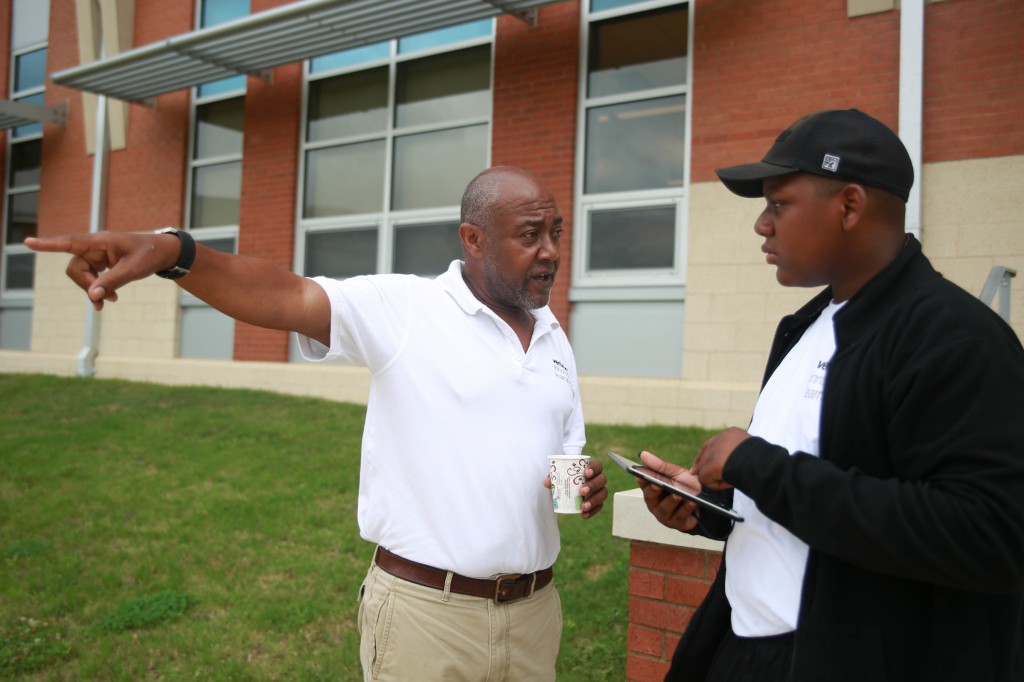 Funded by a two-year grant from the Verizon Foundation, the program exposes young men, from Grades 6-8, to Science, Technology, Engineering and Mathematics (STEM) disciplines. The primary goal of the initiative is to increase the number of minority leaders in emerging technology trends.

“My family used to love watching Agent 007, James Bond movies and MacGyver,” said Hill when asked why he was interested in technology. “We loved what they did with the cars and all the gadgets and stuff.”

Hill, who plans to get a degree in computer engineering, overheard his classmates at Blackburn Middle School talking about flying drones in the STEM summer program, and he asked how he could get involved. “I got started last year, and this is my second year in the program,” he exclaimed.

The first 2017 summer session, June 5-16, was designed for new participants who learned app development and 3D printing. From June 19-30 advanced programming was provided for returning participants, like Hill, which included coding, robotics and drones. During the year, students spend one Saturday a month continuing what they learned over the summer.

Attendance has grown from 83 participants in 2016 to 112 students this year with 12 young men returning from the previous year.

“The program is wonderful. It really gets them hooked into STEM,” said Dr. Kamal S. Ali, chair of JSU’s Department of Industrial Systems and Technology.

The kids were so technologically advanced, according to Ali, they finished the entire two-week curriculum within one week. “We had to redo the curriculum and expand it,” he states.

Ali called the participants “very good” and agreed that the younger kids are more computer savvy than previous generations. “You have to give them a lot more challenging content,” he said. 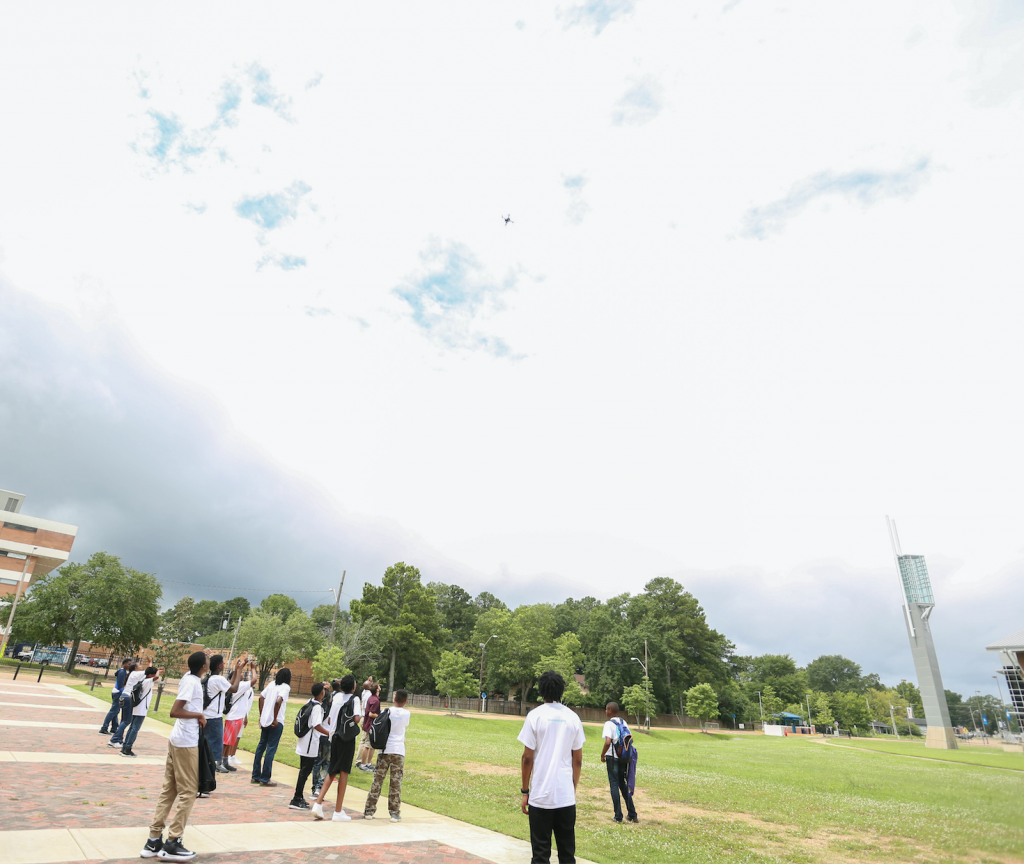 Students in the JSU Verizon Innovative Learning STEM Program watch in amazement as the drone soars to great heights before landing. (Photo by Kentrice S. Rush/JSU)

One of the activities presented to the students was a drone-flying competition that took place on Thursday, June 29, the day before the second summer session ended. Students were separated into four teams in the courtyard of the JSU engineering building. Each team was given a tablet that they used to create a flight plan from takeoff to landing. The drone would take pictures of the journey, and the team with the best pictures would be declared the winner.Ravion Lightfoot of Bailey APAC Middle School said that he heard about the program from friends on his soccer team and was immediately taken with the engineering component. “They were going to teach us how to make apps, and I was interested in learning how to do that,” said the 12 year old.

However, apps were not the only thing that Lightfoot learned to create. He and his project mate, Kevonta Jefferson, an eight-grader at Blackburn Middle School, built a small robot that maneuvered like a remote control car, with the assistance of their professor.

“You would use it to pick up a drink or something — just tasks that are convenient.” Lightfoot explained, “There are other robots that can do more advanced things like search for targets and stuff.”

As they described how they constructed the robot, it was evident that the program had made an impression on the youth. Lightfoot, who wants to be a pilot, said that engineering could help him build his own plane one day.

Jefferson expressed that although he has his sights set on a basketball career in the NBA, he has “learned about engineering and it can be my backup plan if I don’t make it in sports.” 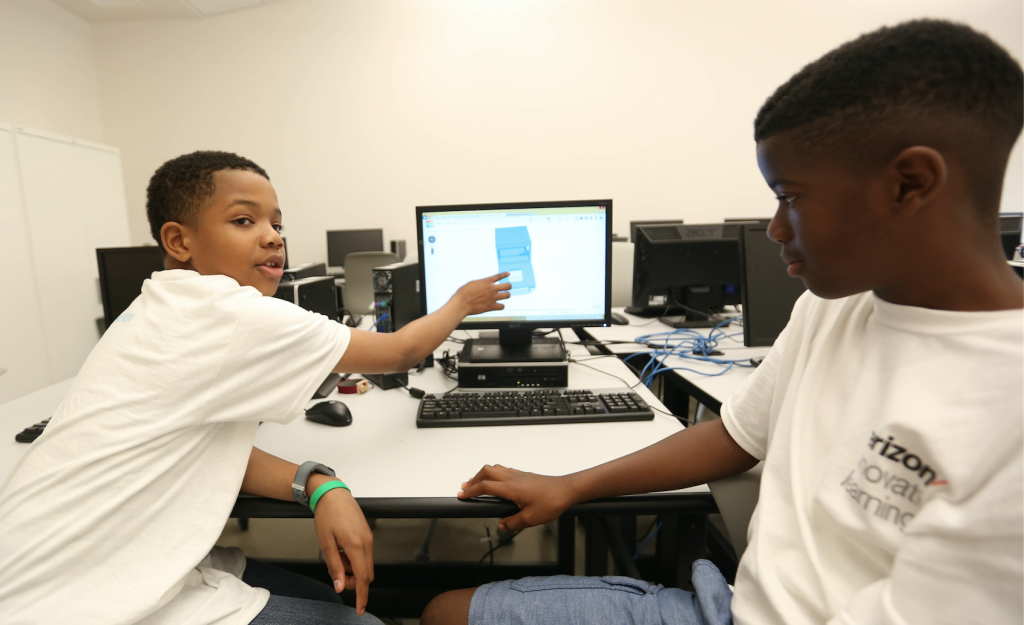 Steven Wansley, left, and his friend Joshua Good are sixth-graders at Olde Towne Middle School. They combined their ideas to design a car that they hope will be produced by Nissan North America in Canton one day. (Photo by Kentrice S. Rush/JSU)

As a middle school liaison for the program, Jackson State doctoral student Kendrick Walker asserted that teaching and Big Data were a passion of his. He pointed out that the program not only offers cutting-edge training but also instruction in character development and entrepreneurship.“I wish I had been taught that when I was their age. So, these young men don’t even realize the tools they’re being endowed with, and they’ll be ahead of their time when it comes to high school and even collegiate work,” said Walker, who also serves as an adjunct physics professor at the university.

While seated in a computer lab, Olde Towne Middle School sixth-grader Steven Wansley said that his parents learned about the program via the Internet. “I’ve been on computers a lot looking for something to invent, and I’ve always wanted to be an entrepreneur,” said the 10 year old.

Through the assistance of 3D imaging, Wansley and his schoolmate, Joshua Good, created a car design that they hope to submit to Nissan North America in Canton.

“It’s a hybrid car that runs on wind power and gasoline,” Wansley said.

Making sure the car was climate-friendly was important to Good, who said, “I feel that most of the bad weather is caused due to the pollutants that are in the air. It (the car) stores wind in the generator; the wind turbine is collecting the wind while you’re driving.

Wearing a constant smile, Wansley conveyed that the idea is for the car to be able to travel long distances without having to recharge it or refuel on fossil fuels. He asserted that the vehicle would be available for purchase by the time he graduated from middle school, but he was not interested in the assembly process.

“I want to design cars, but I’ll leave the building up to the experts.” He laughed. 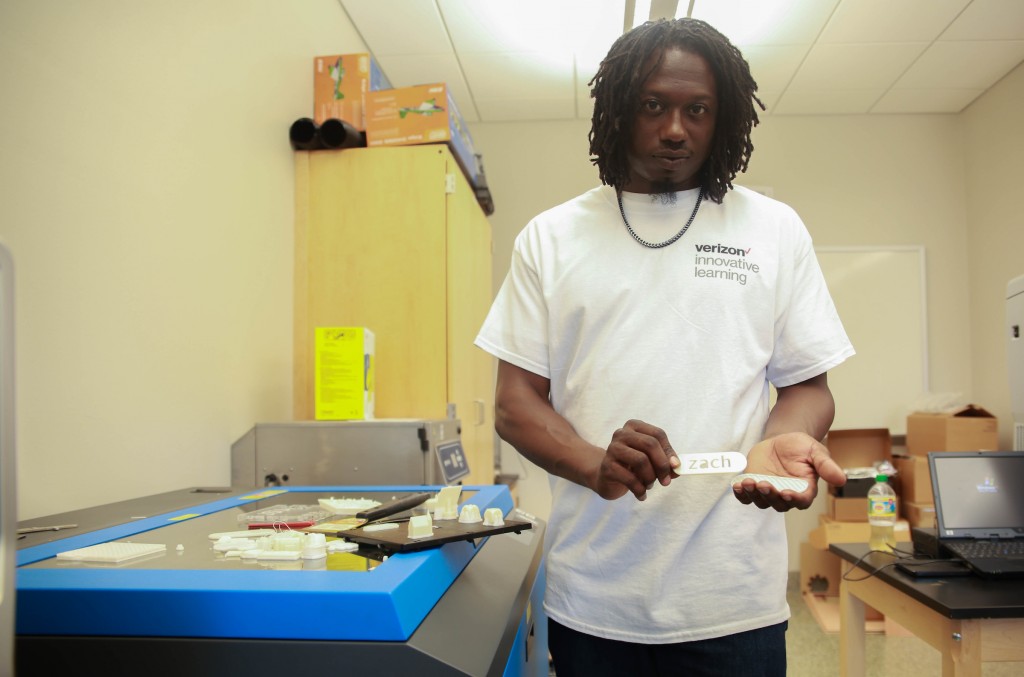 Middles school liaison for the program, Kendrick Walker displays some of the products students made with 3D imaging. (Photo by Kentrice S. Rush/JSU)

Melissa Moore, an analyst at Nissan, revealed that she was relieved she did not miss the registration deadline for her 11-year-old son Dillon Massey, who is a newcomer to the program. “Dillon is a tech person. His favorite subject in school is science,” she explained.Moore disclosed that Massey seemed indifferent when she initially told him about the initiative, but after participating it appears her son has had a change of heart.

Forest Hill High School football and girls basketball Coach Charles Moore said that one reason he joined the program was due to routinely hearing young African-American males declare their hopes of landing in the NFL or NBA. Moore knew that once the statistics added up, there was “no way all those kids could be professional athletes.”

The coach expressed an enormous love for improving the plight of underserved communities and minority groups. He asserted: “Understanding the global economy and where our economy is currently headed is significant. If we don’t convince our young males to get involved and interested in STEM programs earlier, then we (minorities) will be lost,” he said. “We won’t be able to have a competitive edge in the next generation’s economy.”

Dina Smith-Walker, a middle school liaison, declared her most memorable moments of the summer were watching the young men absorb STEM instruction. “You can see the lightbulb turn on when you watch the students learn how to develop their own apps. To hear their ideas, and when they understand how they can take their apps, apply them in daily life, and make society better is awesome,” she said.

On July 26, as one of eight students chosen from 100, Hill will be traveling to Silicon Valley to present what he has learned in the program. The eighth-grader exuded palpable excitement when he said, “I just want to thank Verizon and JSU because if this (program) wasn’t here, I wouldn’t have the knowledge about technology that I have right now.”