Researcher known for work with marine ecosystems, from coral reefs to Antarctica 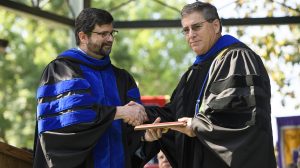 OXFORD, Miss. – Marc Slattery was a little conflicted about being honored for his research achievement at the University of Mississippi.

Slattery, a professor of biomolecular sciences in the School of Pharmacy and research professor in the Research Institute of Pharmaceutical Sciences, was named the 2018 recipient of the Distinguished Research and Creative Achievement Award during the university’s 165th Commencement ceremonies Saturday (May 12) in the Grove.

“It came as a shock, a very pleasant surprise,” Slattery said. “I’m incredibly honored to be amongst the group of past honorees – there are tremendous scientists there.

“When I think about my colleagues here who have never won this award, I have to wonder, ‘What brings me above them?’ There are so many solid scientists here, so it was a very pleasant surprise.”

Created in 2008, the annual honor recognizes a faculty member who has shown outstanding accomplishment in research, scholarship and creative activity. Applicants are nominated by peers and reviewed by a committee of past recipients.

Winning the award is not a solo endeavor, however, Slattery said. Science is interdisciplinary and collaborative, and he has “tremendous collaborators and colleagues (at UM), within the School of Pharmacy and across campus.”

“I also work with several (people) off-campus at different universities who collaborate with me on grants and papers,” he said. “In many ways, I hope that people recognize that this honor is really for a team. I’m lucky enough to stand up for that.

“Everybody has really contributed to my being able to successfully do the work that I’ve done.”

Slattery said that in the broadest sense, he’s a marine biologist, but further efforts to pigeonhole him would be difficult as he has many interests, including a focus on coral reef ecology. His research interests also include pursuing drug discovery efforts in marine invertebrates, algae and microbes.

Slattery’s research has included work in extreme environments, from deep-sea reefs and marine caves to polar ecosystems in Antarctica and kelp forests off the coast of California. 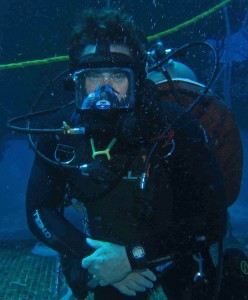 “Dr. Slattery is an international leader in the fields of environmental ecology and marine biotechnology,” said Josh Gladden, UM interim vice chancellor for research and sponsored programs, when presenting the award. “While artfully balancing his teaching, research and service responsibilities, he’s contributed to many discoveries in his field, brought recognition to the university and created fantastic opportunities for our students.”

While at UM, Slattery has served as executive director of the National Oceanic and Atmospheric Administration’s National Institute for Undersea Science and Technology and as research coordinator for the university’s Environmental Toxicology Research Program. He has authored or co-authored more than 100 peer-reviewed publications, and has two patent applications and a book chapter in review.

He also has given close to 200 invited presentations, including presentations before the United Nations and U.S. Senate. He was among 10 faculty members selected to participate in the university’s first TEDx conference.

“Marc is a dynamic scientist, not only because of the groundbreaking research he contributes to, but because he truly embodies the ‘creative’ element of this award,” said David D. Allen, UM pharmacy dean. “Many of his students go on to conduct their own influential research, attesting to the enthusiasm and dedication he brings to his work.

“The School of Pharmacy is home to some incredible scientists and faculty, many of whom are preeminent in their fields. We are fortunate to be home to five winners of this award, and are thrilled that this honor recognizes the breadth, caliber and originality of the some of the research coming out of our school.”

Slattery has received more than $30 million in funding from a range of federal agencies as either a principal investigator or co-principal investigator, and has been recognized with several honors, including serving as president of the American Academy of Underwater Sciences, earning the Cumberland Pharmaceuticals Inc. Faculty Research Award at UM in 2010 and serving as chief scientist on four NOAA research cruises.

He has advised or served on thesis or dissertation committees for 27 Ph.D. students, 25 master’s students and eight Sally McDonnell Barksdale Honors College students.

“At the University of Mississippi, we greatly value and emphasize excellence in scientific discoveries and scholarly research,” Chancellor Jeffrey Vitter said. “This award recognizes those who curate bold ideas and foster collaborative and innovative approaches. As this year’s recipient, Marc Slattery lives up to the exceptional standard we’ve come to expect of honorees.”

Born in California, Slattery moved to Jamaica at age 5 and lived there for about a decade. Fascinated with the outdoors from an early age, Slattery remembers going to the beach in Jamaica, throwing on his diving mask and exploring the vibrant turquoise waters until being hauled out of the water by his parents, who instilled in him a passion for learning and exploring his interests.

In turn, Slattery has spent his career inspiring his students to investigate their interests to the fullest.

“You have to do what you’re passionate about,” said Slattery, who is married to Deborah Gochfeld, a principal scientist in the university’s National Center for Natural Products Research and a research professor of environmental toxicology.

“A career is a long time. You have to work hard and when you are in school, you have to study hard. There are a lot of people competing for the same jobs, but if you are doing what you love, it makes it so much easier.”

This year’s Distinguished Research and Creative Achievement Award was sponsored by GlobalStar, a Covington, Louisiana-based company that is a leading provider of mobile satellite voice and data services. The sponsorship is just one example of several collaborations between UM and GlobalStar, including an agreement to establish a second-generation ground station on campus, which will give Ole Miss students and faculty unique learning and research experiences.