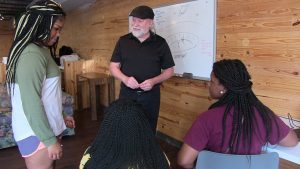 Vince Jordan, CEO of Lobaki, works with Clarksdale students to create a technology hub in the Delta. Submitted photo

OXFORD, Miss. – The University of Mississippi’s McLean Institute for Public Service and Community Engagement will host a virtual reality experience for students in the Catalyzing Entrepreneurship and Economic Development program Thursday (Aug. 24) at the Innovation Hub at Insight Park

Vince Jordan, CEO and president of virtual reality production company Lobaki, will join the 15 Innovation Scholars and Innovation Fellows from 5 to 8 p.m. The students will learn from Jordan, a seasoned entrepreneur, about how he is engaging the community in his work.

Lobaki has established The Virtual Reality Center and Academy in downtown Clarksdale as part of the Indigo Impact Initiative. The goal is to revitalize the Delta through technology and entrepreneurism through partnerships with Meraki Cooperative, the Crossroads Cultural Arts Center and the city of Clarksdale, including Clarksdale Public Schools.

Jordan began the program in Clarksdale this summer to get young people interested in technology, hoping to make the town a tech hub for Mississippi.

“We had good success with this program this summer and are looking forward to expanding it during this school year in the community and the region,” Jordan said.

“Virtual reality is where web design was in the early ’90s and smartphones in the early 2000s. It is a great opportunity for entrepreneurs and economic development in Mississippi and beyond.”

The event is open to the public. Formal remarks will be given at 5:30 p.m. by Jordan and Albert Nylander, McLean Institute director and UM professor of sociology.

Jordan also will visit other units at Ole Miss, including the Center of Innovation and Entrepreneurship and the Center for Mathematics and Science Education.