A grant from the National Science Foundation is helping Jackson State University deliver a powerful message about the prevalence of unconscious bias against women in STEM and people in other academic areas while also unpacking solutions to mitigate the implicit behavior.

Dr. Loretta A. Moore, principal investigator and JSU’s vice president for Research and Federal Relations, said the NSF ADVANCE program has been around nearly 20 years, with most awards having been granted to predominantly white institutions. The JSU ADVANCE project was held recently at the Jackson Convention Complex and aimed to “get people to see implicit bias through their own lens from a broader perspective.” The first award to JSU was presented in 2011 with a specific focus on women of color.

Moore said teachers especially must understand implicit bias, which, according to research, forms as early as kindergarten.

As for the overall mission of the two-day think tank, Moore said it aimed to advance the careers of women in STEM who traditionally have been underrepresented at U.S. institutions. The event also called for a climate conducive to the advancement of all people “regardless of target characteristics” such as gender, race and sexuality. She said, “If you do what’s good for STEM women, it’s really good for all people.” 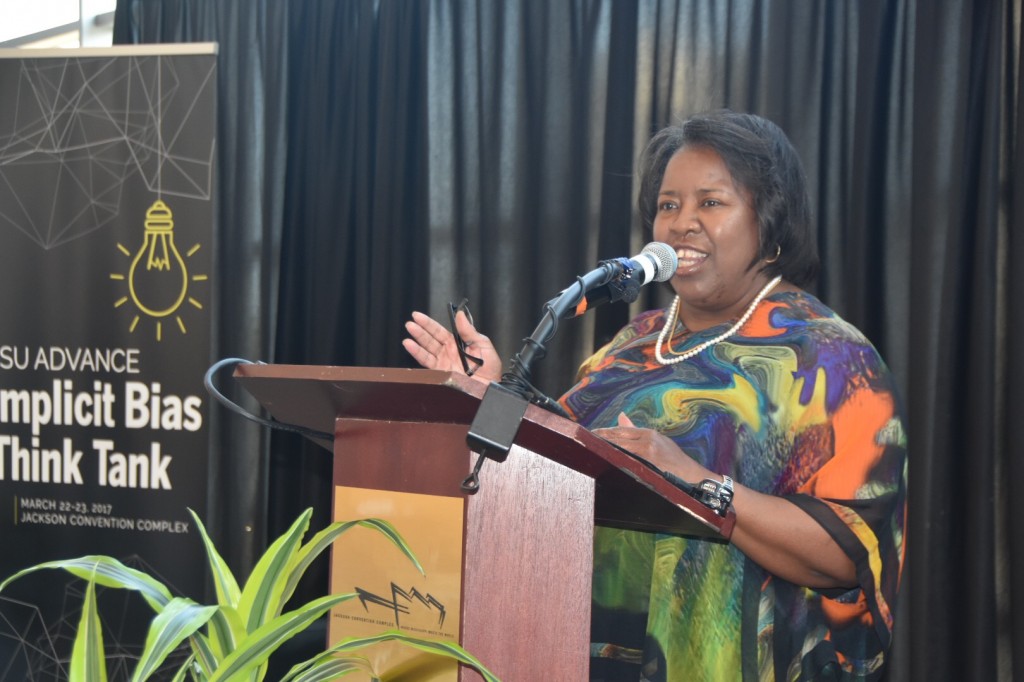 Dr. Loretta A. Moore, principal investigator and JSU’s vice president for Research and Federal Relations, said the think tank held recently inside the downtown Convention Center Complex aimed to advance the careers of women in STEM who traditionally have been underrepresented at U.S. institutions. As well, she said the event called for a climate conducive to the advancement of all people “regardless of target characteristics” such as gender, race and sexuality. (Photo courtesy of Kevin Bradley)

She said conditions that lead to bias result “if you’re rushed or have a heavily mental workload. When these occur you tend to rely on things you’ve been taught and may not be able to really think about why I’m not considering a particular applicant.” Moore cautions that ill-crafted decisions can quickly result in outright discrimination followed by lawsuits and litigation.

She also raised the specter of continued bias in the criminal justice system in which some innocent individuals have been sentenced for crimes based only on preconceived notions; tough discipline that leads to the school to prison pipeline; and substandard healthcare due to race or gender. With the latter, she specifically referred to hospital visits by black females, for example, who may receive inferior medical assistance because of the false belief they can withstand pain. In contrast, however, medical experts may order a battery of tests for white women but simply prescribe painkillers to their black counterparts.

Dr. Webe Kadima, a workshop facilitator and associate professor of chemistry at State University of New York at Oswego (SUNY), expressed confidence that the think tank would garner positive results because “people’s understanding of implicit bias has increased. … It can be very subtle, but you can become adept at identifying it.”

Kadima explained the “intersectionalities” of bias, meaning women such as herself who are black, a native of Africa and a STEM professional. Each category “intersects” to produce multiple hurdles in the race to succeed in academic environments.

She said, “The most detrimental aspect about implicit bias is that it affects relationships because everything we do depend on pulling together ‘people resources.’ In other words, it further prevents people from coming together to solve issues because you’re usually assuming rather than listening. All these built-up stereotypes don’t allow you to work adequately on issues and processes.” 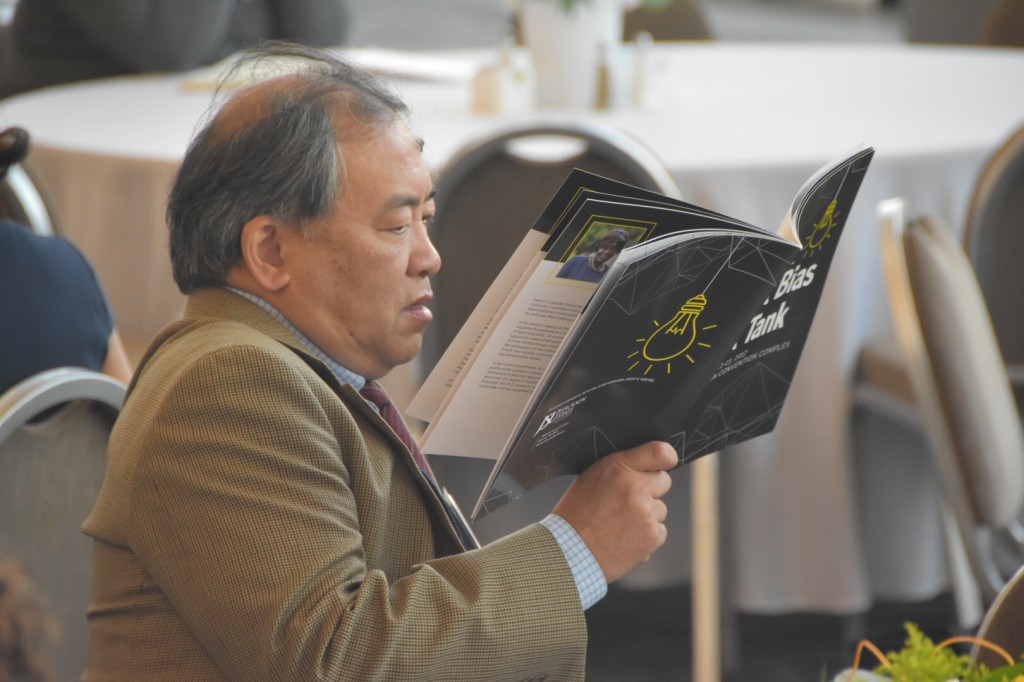 Participants included Dr. Jianjun Yin, professor of education in  JSU’s Department of Elementary and Early Childhood Education, and experts from other U.S. institutions. They participated in breakout sessions to help mitigate implicit bias – defined as the attitudes or stereotypes that affect actions and decision without conscious awareness. (Photo courtesy of Kevin Bradley)

Unfortunately, Kadima said, there exist international faculty members who have biases toward colleagues and students. “They may believe, for example, that African-American students don’t put in the same hard effort as other students, thus labeling them as lazy. Consequently, African-American students may not want to work with international faculty either.”

Suzanne Haley of Maryland assisted Williams and other participants by helping to facilitate 10 breakout groups, represented by people from various parts of the country. By the end of Day 2, teams developed a minimum of 90 strategies (three no-cost strategies that can be worked on right away; three low-cost strategies; and three high-cost strategies). Ultimately, the intent is to locate seed money for participants’ promising ideas.

“What deeply impacted me was how every group included passionate faculty members and administrators wrestling with how to make JSU more informed and less impacted by pervasive implicit bias. I’m impressed with the efficiency and professionalism of JSU. Jackson State has an opportunity to create a prototype for something that can happen on diverse campuses across the country,” Haley said.

Among the suggestions for squashing implicit bias included expanding the university’s Chief Diversity Office; implementing online training on implicit bias similar to a Harvard Association test so people can assess their biases; developing policies and accountability; and including information on classrooms syllabi defining implicit biases and how to report it.

Principal investigator Moore gave illuminating examples of personal experiences with implicit bias. She recounted the time when she was the only African-American grad student at Illinois Institute of Technology. After study groups had formed, she was not invited to join any. As a result, she was “left to figure things out on my own.”

As well, she remembered that when she was a faculty member at Auburn University several amused students eventually visited her office to reveal that Moore was the first black teacher they’ve ever had, and for some it was their first interaction with an African-American, period.

Now, she’s hopeful that JSU’s efforts to mitigate bias will encourage “inclusion initiatives” and erase the notion of “diversity fatigue.”