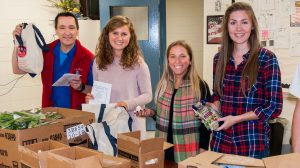 David H. Holben (left) and members of his project team prepare bags of food to be delivered to students at Bruce Elementary School through the 2016 Farm-to-YOUth! initiative. Helping are (from left) Sydney Antolini, Michelle Weber and Kelsey Reece, all nutrition graduate students at Ole Miss. Photo by Bill Dabney

OXFORD, Miss. – Kids are accustomed to hearing adults tell them, “Don’t play with your food,” but they won’t hear it from David H. Holben.

Holben is a University of Mississippi professor of nutrition and hospitality management who wants children to learn through an initiative aimed at using food as a tool to teach mathematics and science.

Holben is a part of the Deep South Network, a research collective that recently received a $1.2 million grant from the National Institutes of Health to support the science, technology, engineering and math learning pipeline for underserved minority youth through informal science learning environments with a curriculum built around food.

East Carolina University’s Melani Duffrin, a former doctoral student of Holben’s, leads the effort with researchers from UM, the universities of Alabama at Birmingham and South Carolina, Auburn University and Georgia State University who are working together to enhance access to learning opportunities and favorably affect science attitudes and career decisions in the health professions among this underrepresented population.

“Our partnership with Mississippi and other Deep South partners is to collect larger regional data to inform efficient, affordable and effective positive impact practices in creating a science culture for underserved youth,” Duffrin said.

“Our goal of expanding the program has a broad application of building stronger partnerships between K-12 teachers and health professionals to achieve an increase in health science literacy for the general population and to better prepare underserved populations in pursuing science careers.”

The Food, Math and Science Teaching Enhancement Resource, or FoodMASTER, program uses hands-on, inquiry-based learning activities to help students learn science, math and nutrition concepts. Students who have participated in the curriculum became increasingly interested in the subject matter of food and were able to conduct scientific observations.

“David Holben is an experienced researcher with great attention to detail and a passion for working with underserved populations,” Duffrin said. “It was obvious that he was a great choice as a partner to begin building the initiative in Mississippi. Under his direction, this project will inform best practices and bring resources to the Mississippi region.”

This new grant will develop new FoodMASTER curricular materials, establish the Deep South Network to serve as a model to others, create and implement formats, assess impact on attitudes toward science and create field trip experiences for underserved minority youth.

“One of the reasons I’m excited about this project is it targets underserved minority youth, and my work has traditionally looked at food insecurity and health outcomes of underserved groups,” said Holben, who has studied food insecurity among these populations since 1997.

The first two years of the five-year project will allow the researchers to “build their team,” with opportunities for professional development, including conferences related to STEM education, Holben said.

“In years three and four, each of us will implement a FoodMASTER program,” he said. “The team at UM will develop a program for Mississippi youth, and then we’ll do it for one year to see what works to improve the second year.”

Holben could utilize his existing partnerships in Calhoun County formed through his work with Farm-to-YOUth!, an initiative supported by the UM Foundation’s Food and Nutrition Security Support Fund that increased almost 1,200 children’s exposure to nutritious food in public schools and sent nutritious produce home to area households.

“They don’t have a summer feeding program in Calhoun County, so implementing a FoodMASTER program there would allow us to meet a need over the summer for food for the children, while incorporating STEM education,” Holben said. “Regardless of where the program is implemented, we are going to teach math and science skills using food.”

For more information about academic programs in nutrition and dietetics at UM, email nhm@olemiss.edu.