The rise of machine intelligence 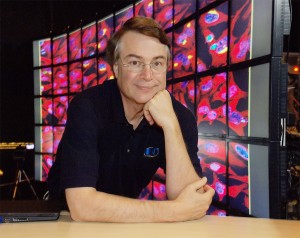 Over the next decade, we can expect autonomous machine intelligence to become pervasive in our society, according to Larry Smarr, founding director of the California Institute for Telecommunications and Information Technology (Calit2), a UC San Diego/UC Irvine partnership.

Jackson State University will host the national Big Data thought-leader in a special lecture and open discussion at 10 a.m. Tuesday, April 11, in the auditorium of the College of Science, Engineering and Technology Building. Smarr carried out theoretical, observational and computational astrophysics for 25 years and has driven the early development of foundational components of our global cyberinfrastructure.

To help spur a future that successfully embraces and guides the development of autonomous machine intelligence, Calit2 has set up a Pattern Recognition Laboratory with a variety of novel low-energy processors that can execute real-time trained neural networks in the exploding mobile environment of drones, robots and self-driving cars.

However, the training of these neural networks requires massive amounts of Big Data and computing time. To support this need, the National Science Foundation (NSF)-funded Pacific Research Platform (PRP), which connects two dozen research universities at 100-1,000 times the speed of the commodity Internet, is creating a new community of computer science machine-learning researchers. This group is also proposing using the optical fiber backbone of the PRP to create a distributed Graphics Processing Unit computing “cloud.”

Before developing Calit2, Smarr was the founding director of the National Center for Supercomputing Applications (NCSA) at  the University of Illinois at Urbana-Champaign.

Finally, Smarr, who holds the Harry E. Gruber professorship in UCSD’s Department of Computer Science and Engineering, will speculate on the exponentially growing machine intelligence and how it will increasingly inter-operate with human intelligence.

Most recentl, Smarr has  become a pioneer in the quantified self movement.

Quantified Self, also known as lifelogging, is a movement to incorporate technology into data acquisition on aspects of a person’s daily life in terms of inputs (food consumed, quality of surrounding air), states (mood, arousal, blood oxygen levels), and performance, whether mental or physical.

He received his doctorate in physics at the University of Texas at Austin and spent three years as a Harvard Junior Fellow. Smarr can be followed on Twitter (@lsmarr) or on his portal http://lsmarr.calit2.net/.