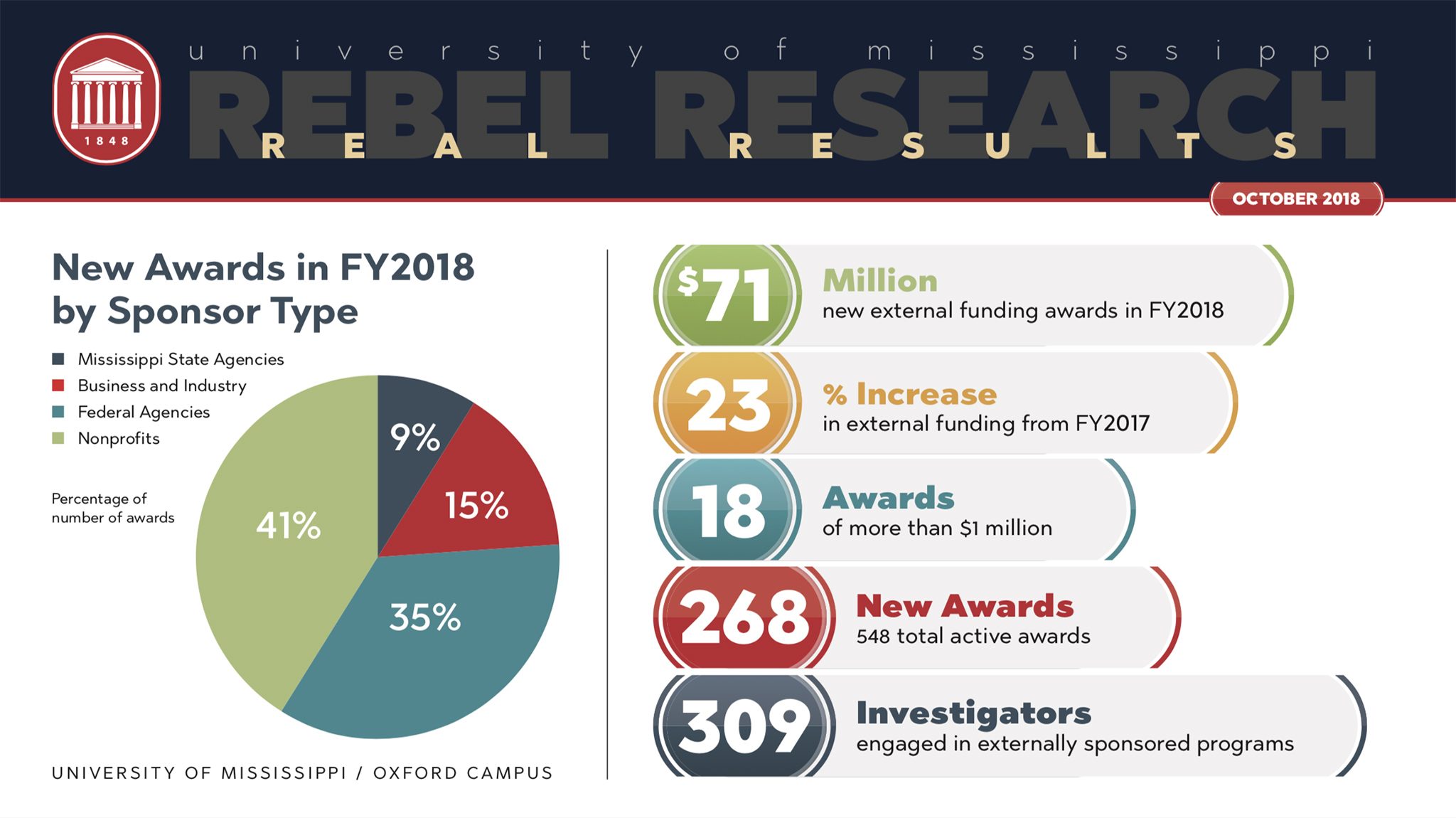 OXFORD, Miss. and JACKSON, Miss. – External funding for research at the University of Mississippi reached its highest level in four years in 2017-18, with more than $134 million in funding awarded.

A total of $134,735,332 in external funding was awarded to the Oxford campus and the University of Mississippi Medical Center, with research dollars being used to favorably impact lives in Mississippi and around the globe, fuel economic growth and prosperity, educate future leaders and innovators, and more.

The external funding amount for fiscal year 2018, which ended June 30, is the highest since 2014 and an increase of 9.3 percent from last year.

“The gains in external funding speak to the stellar research talent and culture at the University of Mississippi,” Chancellor Jeffrey Vitter said. “They also reflect our continuing commitment to produce scientific discoveries and innovations that enhance quality of life and benefit the citizens of our state and society at large.”

For fiscal year 2018, the university’s Oxford and Medical Center campuses received 581 awards. Examples of these awards include helping fund the data analytics graduate programs at the Patterson School of Accountancy, researching solar energy technologies, investigating the safety of antimalarial drug products and exploring solutions to improve the health and development outcomes for Mississippi children.

“The impact of UM research continues to grow, and that is reflected in increased success by our faculty, researchers and research centers on the national level,” said Josh Gladden, vice chancellor for research and sponsored programs on the Oxford campus. “External funding for research and scholarly activity is extremely competitive, which makes this increase even more notable.”

“Research is the lifeblood of our institution,” said Dr. Richard Summers, UMMC associate vice chancellor for research. “When the research mission is strong, we are able to help our education and health care missions succeed.”

In 2017-18, federal funding at both campuses included 387 awards for more than $101.5 million. The awards, agency and funding include:

Awards from corporate, private, state and other sources funded more than $33.1 million during 2017-18. Foundations and nonprofit groups provided $18.7 in funding, private or corporate business and industry provided $8.4 million, and state agencies in Mississippi provided $5.7 million. All other sources were almost $300,000.

According to the 2017 Faculty Research Grant Institutional Rankings published by the American Association of Colleges of Pharmacy, the UM School of Pharmacy ranked 13th in the nation for external research funding. 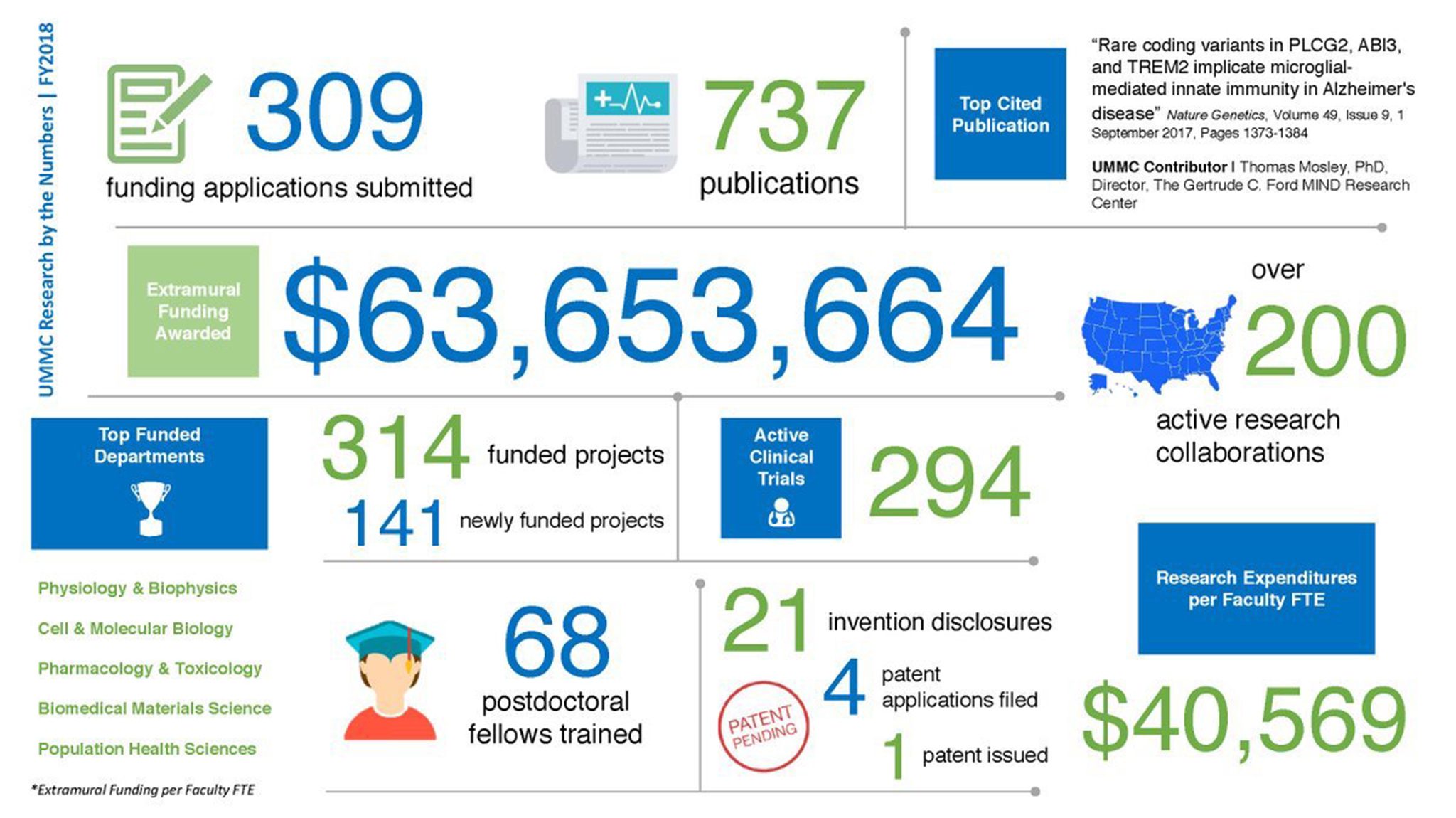 “The investigators at the School of Pharmacy have worked tirelessly to secure funding for projects that have the potential to impact the health of millions of people,” said David D. Allen, dean of the school. “This is truly a whole-school effort, as our faculty, research scientists, staff and students are all integral to our research mission.”

The pharmacy school has several grants investigating aspects of opioid use, including a study on long-term opioid use in older adults, led by principal investigator Yi Yang, professor of pharmacy administration. Older adults are more likely to have chronic pain and to be taking more than one medication, putting them at higher risk of harmful drug combinations.

“Our scientists and faculty are taking on the opioid epidemic from all sides, and this study aims to uncover the impact of sustained opioid therapy in older adults,” Allen said. “The elderly are just as vulnerable to the negative effects of opioid use as younger adults, but they aren’t studied as frequently.”

The School of Medicine at UMMC totaled 267 awards for $54.9 million, the most on that campus. The top-funded units at UMMC were the departments of Physiology and Biophysics, Cell and Molecular Biology, Pharmacology and Toxicology, and Biomedical Materials Science, and the John D. Bower School of Population Health.