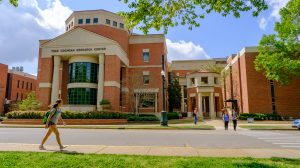 The UM School of Pharmacy has been ranked 12th nationwide for financial value, based on average salaries and student load debt for graduates. Photo by Robert Jordan/Ole Miss Communications

OXFORD, Miss. – The University of Mississippi School of Pharmacy has been named one of the best financial values in the country among pharmacy programs, based on a study by personal finance and loan refinancing company SoFi.

The School of Pharmacy ranked 12th nationwide and best in the Southeastern Conference, based on the ratio of its graduates’ average salaries to their average student loan debt.

The study used data from the American Association of Colleges of Pharmacy on first-year tuition and fees and student loan debt from more than 60 programs around the country, as well as from the Bureau of Labor Statistics on median salaries of 2016 graduates.

“Our focus as a school continues to be on value, which we measure by cost and quality,” said David Gregory, associate dean for student affairs at the School of Pharmacy. “We are grateful for this recognition and will continue to work to advance on the value scale for pharmacy education.”

This 1.2-to-1 ratio of salary to debt accounts for the program’s high rank in the SoFi study.

Starting salaries for UM pharmacy graduates are on the rise, which may be due to the shortage of health care professionals in Mississippi, especially in more rural areas. In 2015, the Mississippi Legislature addressed this issue by expediting licensure for rural practitioners.

Mississippi is ranked fifth nationwide in demand for pharmacists, according to the Pharmacist Demand Indicator.

“In order to continue to recruit student pharmacists to take on public health issues, we must be competitive in all areas,” said David D. Allen, pharmacy dean. “Being a good value in addition to being an outstanding program enhances our ability to attract the top students.”