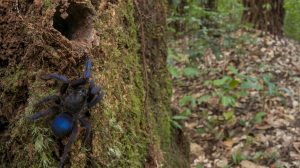 It is believed that the blue tarantula, discovered by UM doctoral student Andrew Snyder in Guyana, is an undescribed species. Submitted photo by Andrew Snyder

OXFORD, Miss. – A shiny cobalt blue gleamed in the beam of a flashlight sweeping through the evening darkness of the tangled rainforest in Guyana.

Holding the flashlight, University of Mississippi doctoral student Andrew Snyder walked closer to this brilliant blue source, lured by the curiosity twinkling from a small hole in a rotting tree stump.

What the biology major discovered is perhaps a new species of tarantula, one whose hairy legs and body are speckled with streaks of metallic-looking blue.

“Many jungle organisms give off eye shine, caused by the reflection of your beam of light off of a membrane in the eye, and typically with a characteristic color depending on the organism,” Snyder said. “The blue that my light beam illuminated in fact was not the eye shine of a spider, but rather the forelimbs of a small tarantula.

“I have spent years conducting surveys in Guyana and have always paid close attention to the tarantula species. I immediately knew that this one was unlike any species I have encountered before.”

Snyder, who is finishing his doctorate at Ole Miss this spring, had been trudging through the rainforest of the Potaro Plateau that evening in the spring of 2014. He had been conducting a survey of nocturnal amphibians and reptiles as the herpetologist for a joint conservation research team through Global Wildlife Conservation and World Wildlife Fund-Guianas.

Then the tarantula captured his eye. And there were more. The tree stump was pockmarked with holes, and several, if not all, housed a tarantula, each seemingly tolerating a neighboring tarantula.

“When I sent the images of the tarantula to an expert who specializes in neotropical tarantulas, he ecstatically proclaimed that this was 99 percent likely to be an undescribed species,” Snyder said.

An individual tarantula was collected and sent to experts for verification. The creature is awaiting its formal description, and the process might require a follow-up trip to the region to try to collect a few more samples. The tarantula’s discovery could be publicized only recently. 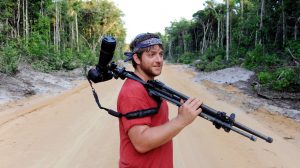 “For a species description, it is crucial to have multiple individuals, ideally both males and females, and across different age classes to account for sexual dimorphism and phenotypic variability (normal variability in external appearance within the same species),” Snyder said.

A return trip to Guyana, which hugs the North Atlantic coast of South America and contains some of the continent’s largest unspoiled rainforests, would not be unusual for Snyder. He’s been there 10 times.

The Baltimore native first journeyed to Guyana during the summer of 2011, weeks before he started graduate school at Ole Miss. He received his bachelor’s degree in biology with a concentration in ecology and evolution from the University of Maryland.

Snyder’s scientific work in Guyana is as a herpetologist, a biologist who studies amphibians and reptiles, and his work is related to his doctoral research through collecting specimens and DNA samples. He’s also visited the country, which is slightly smaller than Idaho, on personal research trips, training programs and conferences.

He was last in Guyana in November to participate in a press release for the results of the Potaro expedition.

Snyder, who describes himself as a Ph.D. candidate, photographer, conservationist and naturalist, also served as an expedition photographer on the Guyana trips.

“(My photography) documents the biodiversity, habitats and conservation threats, and communicates the research that we are doing throughout the country.” 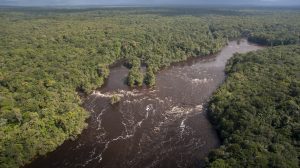 The Potaro River in Guyana flows 140 miles before flowing into the Essequibo River, Guyana’s largest river. The blue tarantula was discovered in the Potaro Plateau area. Submitted photo by Andrew Snyder

Snyder’s passion for herpetology extends back to his childhood in Maryland; his parents allowed him certain exotic pets such as amphibians and reptiles. After receiving his bachelor’s, he spent two-and-a-half summers conducting amphibian and reptile surveys in Cusuco National Park in Honduras with the conservation group Operation Wallacea.

He credits the University of Mississippi and his professors and labmates for making him “an all-around better scientist and biologist.”

“Perhaps most importantly, I began to see the forest for the trees, if you will (while at UM),” he said. “I really began to understand the bigger picture of the work that I was doing or could do. My time at the University of Mississippi also led to so many valuable opportunities and collaborations that otherwise would have never happened.

“My labmates, the other graduate students specifically in the Noonan Lab with me, have been very instrumental in my development.”

The Noonan Lab at UM is headed by Brice Noonan, associate professor of biology and Snyder’s Ph.D. supervisor.

After Snyder’s initial trip to Guyana, he and Noonan brainstormed projects while scanning through Google Earth to find areas for research, which is why Snyder has spent considerable time surveying the Kanuku Mountains in Guyana. 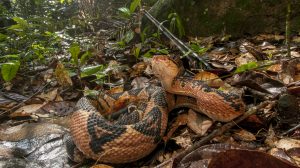 Guyana has one of the highest levels of biodiversity in the world, including several species of snake, such as the venomous Bushmaster. Submitted photo by Andrew Snyder

“Having focused much of my own graduate work in the Guianas I was elated to bring in a student with Andrew’s field experience and a genuine interest in exploring this poorly understood, yet remarkably intact region of the neotropics,” Noonan said. “Andrew has quickly become one of the foremost experts of the region’s reptiles and amphibians, and his extensive fieldwork in the region has greatly enhanced our understanding of all aspects of the area’s biodiversity, as evidenced by this tarantula discovery.”

The partnership between Noonan and Snyder at UM is not unique.

“Andrew Snyder is one of our talented Ph.D. students who work to discover new populations and new species,” said Gregg Roman, UM chair of and professor in biology. “The biology department at the University of Mississippi has many strengths in biodiversity and conservation research. Our graduate students work closely with their major professors and undertake expeditions around the world to learn the science and techniques of surveying and analyzing biodiversity.

“The identification of this new and blue tarantula within tree hollows will help conservationists draw attention to overlooked habitats within the forests.”

The Guiana Shield – a geological formation in northeast South America that underlies Guyana, Suriname and French Guiana, most of Venezuela, as well as parts of Colombia and Brazil – is a special place for its phylogeographic value, Snyder said. An upland region leading up to the Guyanese border with Venezuela and Brazil, the Potaro Plateau is between the lowlands of the eastern Guiana Shield and the famed Guiana Highlands.

“The region is incredibly old and unique in just how much area is still unexplored and not affected by human impacts,” Snyder said. “From a research perspective, this allows for inferences to be made that are not influenced by human interaction as they are in other tropical areas where the habitats have been affected by deforestation.”

Discoveries such as the blue tarantula reinforce the importance of creating and maintaining that balance, said Leeanne E. Alonso, associate conservation scientist with Global Wildlife Conservation. 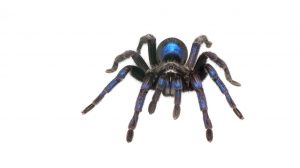 During a spring 2014 expedition to Guyana, UM doctoral student Andrew Snyder happened upon a cobalt-blue tarantula, which is believed to be an undescribed species. Submitted photo by Andrew Snyder

“Guyana has an amazing range of habitats and high diversity of species, especially for such a small country,” said Alonso, who has worked with Snyder for five years. “Discoveries such as this tarantula help us highlight that there’s so much rich diversity in Guyana, much of it still undiscovered, and all of it contributing to keeping the planet healthy. This tarantula helps to remind us all of the beauty of nature, and that we share this planet with so many interesting creatures.

“It’s intriguing to think about why these tarantulas are blue. Perhaps the color helps them startle predators or blend into the leaf litter. Such large predators must have an important role in the food web of the tropical forest.”

The blue tarantula, with its stunning color, also causes people to take another look at invertebrates and realize the importance of conserving them, Snyder said.

“Since this discovery, the amount of people who have commented, ‘I hate spiders, but this one is beautiful!’ is really telling,” he said. “Conservation starts with awareness.

“The fact that this tarantula is making people aware of the stunning biodiversity of this area is key. Guyana was so proud of this discovery that they actually painted a large mural of it on one of their walls at the Georgetown Zoo.”