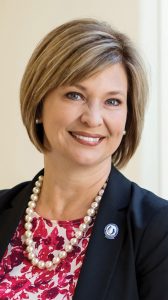 JACKSON, Miss. – Dr. LouAnn Woodward, University of Mississippi vice chancellor for health affairs and dean of the School of Medicine at the UM Medical Center, will help set the course for medical education in this country and beyond as chair of a powerful accrediting body.

For a one-year term that begins July 1, Woodward chairs the Liaison Committee on Medical Education, which sets standards for U.S.- and Canadian-chartered medical education programs run by universities or medical schools.

Having led UMMC since March 1, 2015, Woodward served simultaneously as chair-elect of the LCME for a year after being confirmed unanimously by its board.

“I am honored to serve at a time when overall national changes to heath care and health care delivery are in full swing,” Woodward said. “We want to try and mitigate the impact on medical education and on students.”

As the head of the nation’s authoritative accrediting body, she will help set the tone for medical education during a critical time for health care in this country.

“There are a few things we always worry about,” Woodward said. “Right now, student debt load is becoming a concern as schools become more financially strained and they look to students to help cover those shortfalls; we want to protect against that as much as we can.

“Also, we continue to pay attention to the way students interface with electronic health records; it’s a balance between training them on the use of EHRs and keeping the EHR from distracting from their learning and clinical experiences.”

During the previous 12 months, when Woodward served as LCME’s chair-elect, about a dozen medical schools were added to the AAMC’s membership, for a total of 147 accredited U.S. schools. Also on its rolls are around 400 major teaching hospitals and health systems, including 51 Department of Veterans Affairs medical centers, and more than 80 academic societies.

Another 17 M.D. programs in Canada are accredited by the LCME in cooperation with the Committee on Accreditation of Canadian Medical Schools, on which Woodward will serve as a voting member.

“While I am chair, I’ll still be functioning as a member of the LCME, doing site visits and reviews, but also as chair, organizing and helping determine the direction of meetings,” Woodward said.

“I believe my role as chair, beyond all of that, is to help guide the LCME in shaping the strategic direction of medical education, making sure it is relevant and continues to realize positive changes.”

Most state boards of licensure require that medical schools earn LCME accreditation, indicating that they meet national standards for the awarding of a medical degree.

An institution must be accredited by the LCME in order to receive federal grants for medical education and participate in federal loan programs.

“As vice chancellor for health affairs, Dr. Woodward is ideally suited to lead the LCME as it adapts to meet many challenges,” said LCME board member Dr. Roger Hadley, dean of the Loma Linda University School of Medicine in California and executive vice president for medical affairs and chief medical officer for Loma Linda University Health.

“Economic demands and unprecedented advancements in technology will force many changes in the role of medical doctors.”

A native of Carroll County, Woodward is also a professor of emergency medicine. She earned her undergraduate degree from Mississippi State University and, in 1991, her M.D. at the UM School of Medicine in Jackson, where she also completed her residency training. Dr. John Fogarty, who served as LCME chair for the 2015-2016 academic year, said that in the four years since Woodward was selected to be a member of the organization, “she has been a tireless contributor and dedicated professional.

“Dr. Woodward is a highly knowledgeable and experienced LCME member, and it was a delight to work with her,” said Fogarty, dean of the Florida State University College of Medicine in Tallahassee, who just completed six years on the LCME.

“I am confident that the LCME is in great hands under Dr. Woodward’s excellent leadership.”